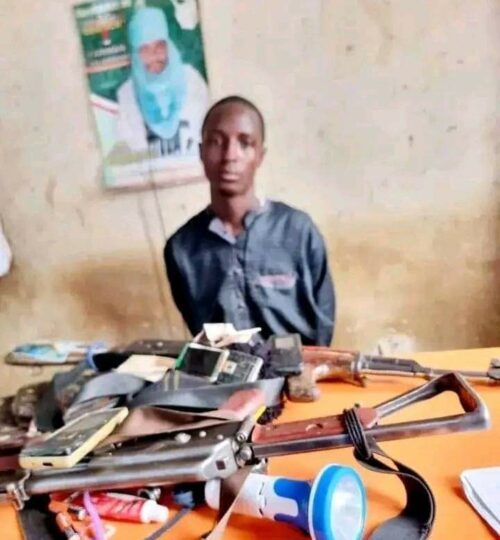 The Kaduna State Police Command has arrested a 20-year-old terrorist, Yusuf Monore and recovered from him an AK-47 and AK-49 rifles.

Monore was also found with five rounds of live 7.62 x 39mm ammunition at Galadimawa forest in Giwa Local Government area of the state after a fierce gun duel.

According to him, the operatives met fierce stiff resistance from the banndits, who later succumbed to the professional fire power of the operatives.

He said that the bandits scampered deeper into the forest with varying degrees of bullet injuries.

“However, the brave operatives succeeded in arresting one of the bandits with AK 47/49 rifles and five rounds of live 7.62 X 39mm ammunition.

“Other items recovered include three Tecno phone handsets and a torchlight.

“The suspect is currently undergoing thorough investigation as the operatives are still on aggressive pursuit of his criminal cohorts,” he said.

Jalige said that the Commissioner of Police Kaduna, Mr Yekini Ayoku, commend the gallantry exhibited by the officers who carried out in the operation.

He pledged to deepen the existing robust synergy and collaborative engagement among security forces in the state.

The command spokesman said that the police will remain resolute and focused on “exterminating enemies of our collective security.”

Ayoku urged law abiding citizens and residents of the state to be vigilant and promptly report all suspicious characters to security agencies.

He assured resident of confidentiality of all sources of information.