NAFDAC cracks down on manufacturers of herbal aphrodisiacs 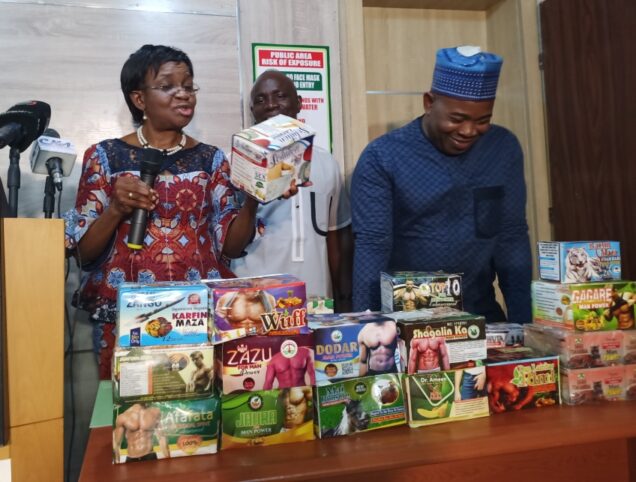 NAFDAC cracks down on manufacturers of herbal aphrodisiacs

The National Agency for Food and Drug Administration and Control (NAFDAC) said it has begun a nationwide crackdown on producers of unapproved sex-enhancing drugs in the country.

The Director-General of the agency, Prof. Mojisola Adeyeye, made this known at a news conference on Friday in Abuja.

She said that the step was taken after clinical analysis revealed that most of the sex enhancers were laced with Indian hemp and very dangerous chemicals that could damage the liver and kidney.

Adeyeye said one of the dangerous products discovered by NAFDAC was “Kurkura”, used particularly in the Southwest and Northern axis of the country.

“Out of the above, only Haonu laha herbal mixture is registered, but nonetheless laced with unapproved substances that are injurious to the body.

“Among many others, Kurkura is an illicit product illegally consumed for the sole aim of getting intoxicated.

“This substance can cause irrational thinking, altered state of mind, which if taken by drivers can lead to road traffic accidents with attendant fatality consequences.

“This could also lead to criminal behaviours such as rape, kidnapping and murder,” she stressed.

The D-G said that the agency would prosecute any of the illegal manufacturers and distributors arrested.

“Findings from various operations carried out by the agency revealed a dangerous trend in the use of such substance laced with high concentration of tobacco and sometimes cannabis.

“Some categories of people in the population such as artisans, drivers, commercial motorcycle drivers and others, have been engrossed in the consumption of these substances, which are dangerous to the health.

“So far, only one of the illegal factories involved in the production of such unauthorised products has been shut down and the owner arrested,” the D-G said.

“The owner admitted that he dissolves the Hyergra 200, Cannon Extra and the Amafranil in a drum and mixes the content with boiled Kanunfari, Garlic, Dundu, Marke, Hankufa, Sweetener and Sodium Benzoate to make up the manpower preparation.”

She added that the label on the prepared herbal manpower drug reads 100 per cent herbal.

The D-G also said that an alcoholic bitters product popularly known as “Japata” which was duly registered by the agency, was discovered to be laced with marijuana, quite different to the registered one which only had ethanol.

According to her, NAFDAC has been able to shut down the company and will continue with the raid.

She urged well-meaning Nigerians to be drivers of the war against fake and counterfeit drugs, as well as adulterated and unwholesome foods and other regulated products.

Adeyeye assured Nigerians that NAFDAC was doing all it could to ensure that only safe medicines and wholesome foods were sold to citizens.

The D-G also solicited the support of health practitioners, community and religious leaders, the press and all other stakeholders, to enlighten the citizenry not to patronise quacks.

She called on Nigerians to be watchful of drugs, food and other regulated products they purchase and report any suspicious activities within their environment to NAFDAC.