No Casemiro, no problem for Real Madrid against Celta Vigo 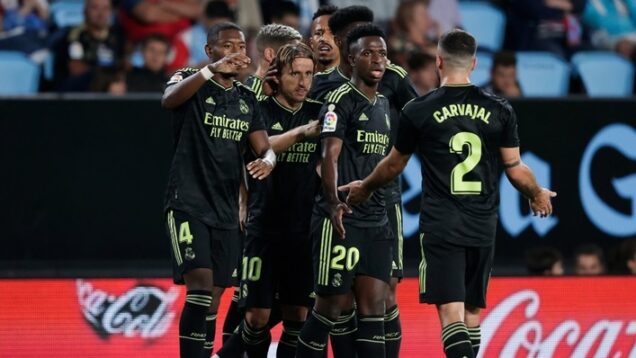 Real Madrid made it back-to-back wins to start their LaLiga title defence as goals from Karim Benzema, Luka Modric, Vinicius Junior and Federico Valverde sealed a 4-1 victory over Celta Vigo.

Carlo Ancelotti’s side agreed a deal with Manchester United on Friday for the sale of midfielder Casemiro, but they scarcely missed the Brazilian enforcer in what was a dominant performance against Eduardo Coudet’s men at Balaidos.

Benzema opened his league account for the season from the penalty spot early on, before Iago Aspas leveled with a spot-kick of his own midway through the first half.

Modric gave Madrid the lead again with a wonderful strike shortly before half-time, while Vinicius and Valverde were on target in the second half as Los Blancos, who missed a late penalty through Eden Hazard, wrapped up maximum points with the minimum of fuss.

Madrid went ahead in the 14th minute through Benzema’s penalty after David Alaba’s shot had crashed into the arm of Renato Tapia, the spot-kick given after a lengthy pitchside review from referee Jesus Gil Manzano.

Celta levelled with a penalty of their own in the 23rd minute, Aspas powerfully striking past Thibaut Courtois from 12 yards after Goncalo Paciencia’s header was blocked by the arm of Eder Militao.

Los Blancos restored their lead three minutes before the interval, however, when Modric jinked his way to the edge of the area and whipped a sumptuous strike into Agustin Marchesin’s top-left corner.

Modric was key to Madrid’s third goal as well, the midfielder threading a fine ball through for Vinicius, who rounded Marchesin and slotted into an empty net in the 56th minute.

Valverde then added a fourth 10 minutes later with a clinical finish from 15 yards following a flowing counter-attacking move, before substitute Hazard saw his spot-kick saved by Marchesin after Benzema had been fouled by Hugo Mallo.

What does it mean? Madrid extend run over sorry Celta

Celta had failed to win any of their previous 16 games against Real Madrid in LaLiga (D2 L14), and it was not hard to see why as a dominant Madrid stretched that run to 17.

Despite the loss of Casemiro, Los Blancos look in good health for the 2022-23 season. This victory meant they have won their opening two LaLiga games in a season for the first time since 2018-19 under Julen Lopetegui.