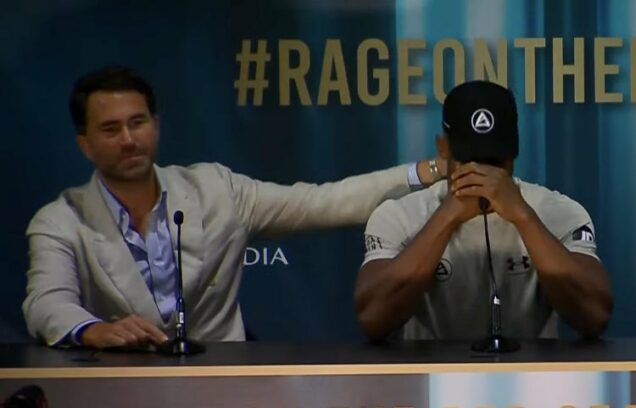 Anthony Joshua broke down in tears in his post-match press conference as he explains his bizarre behavior following his loss to Oleksandr Usyk.

Joshua, after suffering a second successive defeat to Usyk, picked up two of the belts and slammed them to the ground. He then stormed out of the ring.

He was later convinced by his team to return to the ring.

Joshua briefly spoke to Usyk before grabbing the microphone and launching a bizarre monologue about the fight.

He said: “Usyk is one hell of a f***ing fighter, let’s give him a round of applause. “Sorry guys, look if you knew my story you’d understand the passion.

“I ain’t no amateur boxer from youth, I was looking at jail. I’m stealing this Usyk, I’m sorry but it’s because of the f***ing passion.

“I’m not a 12-round fighter, I’m a new breed of heavyweight, Mike Tyson, Sonny Liston – they say ‘he doesn’t throw combinations like Rocky Marciano,’ because I’m not f***ing 14-stone.”

However, Joshua in his press conference explained his comments were “from the heart” and came as a result of him being “mad” at himself.

Joshua, still in his emotional state, said: “When you’re trying to do things from the heart and everyone is just not understanding. It was just from the heart. I was mad at myself. Not anyone else just myself.

“So I thought, I’ve got to get out of here because I’m mad. Like anyone, when you’re angry, you might do stupid things.

“But it comes at a cost, a big cost. It’ll never break me, but it takes real strength for it not to break me. And tonight, there’s a little crack in the armour when I took a loss.

“And I think you just saw me just upset. And with the speech, I was just speaking about where I come from. I was on the roads, really.

“And I just kind of laid it all on the line with my speech. But let’s not forget the champ Oleksandr Usyk. He put on a phenomenal performance as well. So credit to him.

“I can’t remember what I said in the ring because it was just so passionate. But I just want to say thank you to him for taking part in a great historical fight as well. It takes two to tango. I was just so upset.”

Snippet from AJ’s press conference below.

Usyk, on his part, insisted that he has “nothing but respect” for Anthony Joshua.

The champion said: “I didn’t feel much at this time when he was a bit frustrated. Just common emotions. It’s all good. We just need to communicate a little bit.

“The good things that he said about me is something that I accept. But I don’t accept it deep to my heart because I want to stay a humble person.

“I don’t want my pride inside me to go bigger. That’s something like that. I don’t believe in good words.

“I have nothing but respect for Anthony Joshua. I saw him a little bit emotional and I saw him pulling some of my team-mates and that looked like a bare-knuckle fight.”