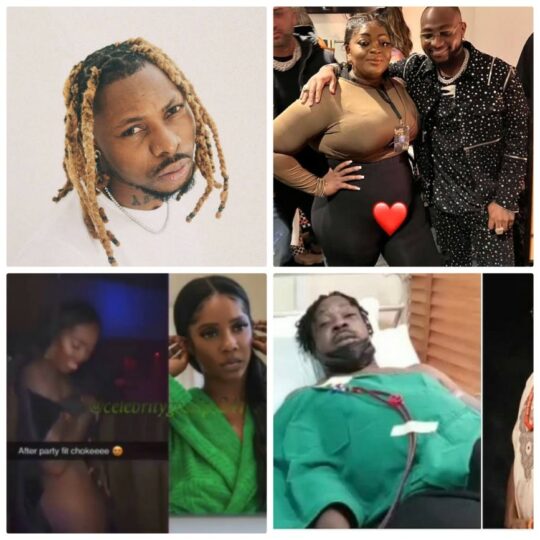 Veteran Nigerian rapper, Eedris Abdul Kareem kicked off the weekly trend with the sad story of his health challenges which he shared during a colloquium held on Aug. 14 at Freedom Park, Lagos.

Eedris, 48, was recently diagnosed with kidney failure, and the colloquium organised by Unchained Vibes Africa and Lakreem Entertainment was to bring together various stakeholders to support him.

The “JagaJaga” crooner became the talk of social media following his disclosure that his wife, Yetunde, is his kidney donor.

As fans and well-wishers continued to pray for Eedris Abdul Kareem, Tiwa Savage, Nigerian singer and songwriter, lightened up the mood when she gave her fans more than they asked for, as she was seen in a video wearing a bare-bottomed outfit to an after-party.

The 42-year-old singer had the internet buzzing on Monday when she stepped out in the revealing dress for an after-party to celebrate her sold-out show in London.

As some fans bashed the “African Bad Girl” for what they described as inappropriate, some applauded her for reminding her fans that she is into “Showbiz” and not another profession.

On Tuesday, actress Eniola Badmus came all out for the gram when she was spotted in a viral video spraying money on Nigerian singer, Davido, who was overwhelmed.

As some fans talked about the amount of money she sprayed and how she had always been a fan, friend and supporter of Davido, some could not help but assess her size which had clearly gone through a lot of transformation.

While some fans praised the actress for her transformation, some advised her to keep her weight and not let negative comments get to her.

On Wednesday, Nigerian artiste, Daniel Benson, popularly known as BNXN, trended on social media after a video of him having an altercation with policemen in Lagos went viral.

A now-deleted tweet by BNXN also confirmed that he had been in a situation with the police, which led to him spitting on an officer.

“Spat in a police officer’s face and it felt so good. I let you in my car and you dragged and tear my shirt, and start slapping me? Nah, everybody must stop!” he wrote.

The spokesperson of the Police Command in Lagos State, SP Benjamin Hundeyin, in reaction to the incident said BNXN would be penalized if found wanting and the same would apply to the policemen in the video.

Sharing pictures of BNXN’s deleted tweet, the PPRO said; “#BNXN proudly tweeted that he ‘spat in a police officer’s face and it felt so good: He has since deleted the tweet.

“The police officers will be sanctioned for their misbehaviour if established, while #BNXN will surely answer for his assault on a police officer.”

In what seemed like a reaction to the BNXN incident with the police, actor Yul Edochie on his Twitter page, disclosed that he had never being harassed by policemen and that the key is humility.

“I do road trips a lot, I’ve met so many policemen on the road and they’ve never harassed me before.

“The secret is humility. All that don’t you know me attitude, keep it aside. You’re a citizen just like everyone else. Once you humble yourself na policemen go hail you pass,” he tweeted.

With over 5,000 searches on the internet, Nigerian entertainer, Charles Oputa, popularly known as Charly Boy, on Aug. 18 revealed that he was thinking of having a town hall meeting with three presidential candidates.

Charly Boy, who had continued to air his views on Nigerian politics added that he would also like some youths to be present so that they can ask the candidates the plan they have for the youth.

The “Area Father” as he is fondly called was recently on the news during his visit to former president Olusegun Obasanjo, where he described himself as the “President of Frustrated Nigerian Youths”.

Fans and well-wishers have continued to congratulate the rapper including Nigerian comic actor, Debo Adedayo, popularly known as Mr Macaroni, who described the album as “Sweet”.

“M.I JUDE ABAGA IS THE GUY!!!! See as Album sweet like honey.” he tweeted.

@Kelechi_Random said, “Especially the track, “the inside” with phyno and the cavemen.The difference and epic sound is mind blowing.”

Asaka announced the release of the highly anticipated music video on his Twitter account when he posted a clip of the video with the caption “My new record Terminator is out now (video/audio)
[email protected], Dir. @boy_director, C/w. @Olamide”

Twitter acknowledged “Senior Adviser”, Daniel Regha, however, commented on the video, saying “Asake, it’s a good thing you are maintaining ur originality as an artiste, but it’s also time to evolve and push ur pen.

“Your songs are literally sounding al!ke which isn’t good for an upcomer. Also switch up to new instrumentals, don’t be too predictab!e. Always try to outdo urself.”

On Saturday, English Premiere League club, Arsenal Football Club, topped the trends with over 200,000 searches after thrashing Bournemouth 3-0 to top the league table.

French Centre Back, William Saliba’s first Arsenal goal and a double strike from captain Martin Odegaard sealed the win for The Gunners which happened to be the third straight win.