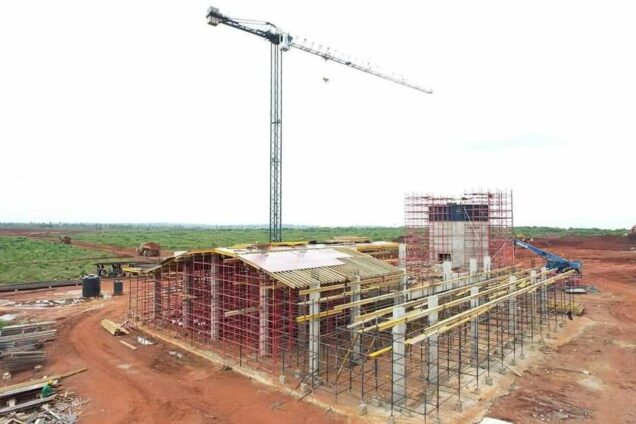 Ogun State Governor, Dapo Abiodun, said the Gateway Agro Cargo Airport, Ilishan Remo, will run commercial flights when completed. This is even as authorities of the Nigerian Air force (NAF) and the Nigeria Customs Service (NCS), have indicated an interest in establishing their operational bases at the airport.

Prince Abiodun made this known at an interactive meeting with leaders of Community Development Councils and Associations in all the 20 local government areas, held in his office at Oke-Mosan Abeokuta.

The governor disclosed that some airlines have shown interest in operating commercial flights at the airport, which will boost the economy of the state.

“Work is ongoing at our Cargo Airport at Ilisan-Remo. I want to inform you that Nigerian Air Force and the Nigeria Customs Service have written to me that they would like to have their operational bases at the airport when it is ready.

“Not only that, but some commercial airlines operating in the country have also shown interest in the airport. That means by the grace of God, when the airport starts operations this December, people in Ogun State will have the opportunity to board their flights from there to anywhere they want to go rather than going to Lagos,” he said

The governor explained that his administration’s decision to build the airport was to ensure that the state benefits from being the industrial hub of the country as well as the numerous value chains that come from such a gigantic project.

The agro-cargo airport was revitalized by the present administration after being abandoned by former Governor Ibikunle Amosun.

Its construction commenced in March 2022. When completed by December this year, it would probably become the fastest constructed airport on the continent.

The project, when operational will provide no fewer than 25,000 jobs for the people of the state

Prince Abiodun also spoke on plans by his administration to further open up the state for more investment and social activities.

He disclosed that the Ogun Light Up project that would ensure constant power in the state would kick-start in the capital city and spread to other parts of the state, while Mowe, Ibafo and Abeokuta will benefit from the urbanisation project.

Abiodun informed the community leaders that his administration has started implementing its Multimodal Transportation System with the launch of a pilot Bus Transit programme in Abeokuta, adding that the reconstruction of major federal roads such as the Ijebu-Ode-Epe, Sagamu-Siun-Abeokuta and Atan-Lusada-Agbara roads, was to ensure that people carry out economic activities without stress.

“Our mission was to provide a focused government and this was informed by our geographical location. We have a border with the biggest economy in Nigeria and the fifth largest in Africa and an international border with the Benin Republic. We encourage investors to come in and invest in our State and in so doing create employment opportunities for our youths.

“We also resolved to complete all uncompleted projects that will add economic value to the lives of our people. As I speak, we have constructed at least a road in all the 20 local government areas. We have rehabilitated schools and provided them with furniture so that they can keep bringing out the best quality of education the state is known for,” he noted.

He assured the leaders of Community Development Councils and Associations that they would be involved in decisions making especially on siting and execution of projects in their various communities, assuring that the meeting would be held regularly to interface on issues affecting the well-being of the people.

Responding, the Chairman, Community Development Council, Ogun Central, Alhaji Waheed Adekunle, appreciated the governor for convening the meeting after waiting for such an opportunity in the state for more than 10 years.

He, however, called on the governor to look into the poor state of the Social Development Institute, Shasha, Ilisan- Remo, to put it in proper shape just as empowerment programmes should be extended to youth in communities to give them a sense of belonging.