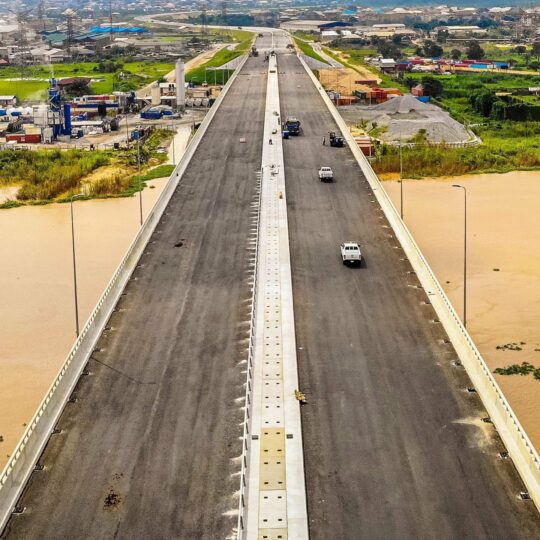 First, the checkered history and deceit of the 2nd Niger Bridge.

After decades of rigmarole by successive military regimes, successive PDP administrations promised to build the 2nd Niger Bridge during their 1999, 2003 and 2007 Presidential election campaigns. It did not.

Upon the return to civilian rule on May 29, 1999, President Olusegun Obasanjo promised to deliver a second Niger River bridge.

However, Obasanjo’s administration did not carry out any major activity on the project until five days before he handed over in 2007 to the administration of late President Umaru Musa Yar’ Adua. That was when he flagged off the project in Asaba in Delta State.

The handing over of the project by Obasanjo to Yar’ Adua made his (Yar’adua’s) administration to effectively inherit a ₦58.6 Billion proposed cost for a six lane, 1.8 km tolled bridge, which was to be completed in three-and-half years.

Unfortunately, the subsequent death of Yar’ Adua on May 5, 2010 marred the progress of the project.

During the 2011 Presidential Campaign, President Goodluck Ebele Azikiwe Jonathan took the rigmarole a notch higher by promising the respected Obi of Onitsha and by extention the South East at an Onitsha Town Hall meeting that he will construct the bridge and if he did not complete it by 2015, he “will go on exile”. That is a direct quote. He won the election.

In the lead up to the 2015 Presidential elections, on March 10, 2014, President Jonathan alongside Mr Peter Obi and other PDP stalwarts went to the bridge site for a flag off excercie where he showcased what he said was a map of the bridge. It is on record.

Thus for 4 years (2011 – 2015), the Goodluck Jonathan led PDP administration did nothing worth mentioning on the bridge except a completed map of the bridge. There was not even a settled and effective source of and arrangement for funding agreed.

It bears mentioning that no leader worthy of note from the South East reminded him (President Jonathan) of the public promise he made to the Obi of Onitsha 4 years earlier; to even get an explanation or apology. The South East still resolutely stuck with him and essentially lost the election with him. The South East was rather fed that Buhari hated Igbos and most swallowed it hook, line and sinker.

Yet the same Buhari came in 2015 and resolved to end that perpetual deceit of the South East and Nigerians in his resolve to do right for the nation without minding who it will directly benefit.

In August 2015; after scrutinising the contract cost and other conditions surrounding the Second Niger Bridge project, President Buhari cancelled the moribund and unproductive N325 Million contract approved in 2012 by President Goodluck Jonathan for final planning and design of the bridge under the same Obasanjo PPP model with Gitto Group; which never came through.

The bridge was then redesigned by the Buhari administration to bring it up to modern and efficient standards; adding an extra lane and Bypasses plus a tolling plaza to make the bridge sustainable after construction; in line the new policy of tolling certain bridges and highways nationwide.

The bridge was then redesigned by the Buhari administration to bring it up to modern and efficient standards; adding an extra lane and Bypasses plus a tolling plaza to make the bridge sustainable after construction; in line the new policy of tolling certain bridges and highways nationwide.

I mean we were used to toll gates which are meant for not only maintaining such infrastructure but building new ones until corruption took them over. Would it be preferable that a bridge was built with tolling or that no bridge was built and no tolling. The 2nd Niger Bridge won’t be the only bridge or highway that would be tolled nationwide by the way.

Under the new arrangement, the scope of work was expanded to involve the construction of a 1.6km bridge over the River Niger, construction of two secondary bridges at Amakom Village Road and Atani Road spanning 21.7 meters each, demolition of existing flyover and construction of new interchange at Onitsha-Owerri Road.

The re-design also involved the construction of 3.3km Approach road on the Asaba side and 7.0km approach road on the Onitsha side of the main bridge (a total of 11.9km link roads), a toll plaza which consists of eight lanes in each direction, and site clearing of the Right of Way (RoW) including the removal of all bush, trees and shrubs.

A fresh contract at initial sum of N206 billion was signed in 2018 with Julius Berger Nigeria to be funded by the Presidential Infrastructure Development Fund (PIDF); a Fund created by President Buhari to accelerate the completion of key infrastructure projects; including the Lagos – Ibadan Expressway and the Abuja – Kaduna – Kano (AKK) road.

On the source of funding and nature of the project as a Public-Private Partnership (PPP) arrangement, apart from the federal government seed funds through budgetary allocations, the recoveries made from Abacha loot, as part of the Presidential Infrastructure Development Fund (PIDF), the Nigerian Sovereign Investment Authority (NSIA) was also expected to bring in other private capital which is expected to be recouped, with of course returns.

Construction of the bridge started on September 1, 2018 with an expected completion date of February 2022 and JBN kept updating Nigerians on the steady progress of the construction since then.

Today, we can say without any iota of doubt that the 2nd Niger Bridge is as good as done. Thus the promise made by President Muhammadu Buhari to Nigerians on October 8, 2020 that his administration would complete and commission the Second Niger Bridge before the end of his tenure in 2023 which many people did not take seriously because of our experiences has been faithfully kept.

At this point, it bears addressing the ignorant submission by some ignorance and hate driven folks about the height of the new 2nd Niger Bridge and shipping vessels.

First, the management of Nigeria Inland Waterways Authority (NIWA) under the Buhari Administration during the redesign of the 2nd Niger bridge met with Julius Berger Nigeria Ltd and agreed on the height of the bridge because vessels were expected to turn under the bridge and that was factored in.

It might help to educate some people that Onitsha is a River Port and not a Sea Port. It can only accommodate flat bottomed vessels. Indeed there are no sea ports in Nigeria that can take ocean going vessels. Such vessels tranship on the Atlantic ocean into smaller vessels which can now come into Nigerian waters.

It might also interest some to know that the Onitsha River Port was moribund all through the decades until once again, under President Buhari, the National Inland Waterways Authority (NIWA) headed by Dr George Moghalu in July 2022 concessioned it to Universal Elysium Consortium Ltd led by Dr George Nwangwu for a 30 year period in a process midwifed by the Infrastructure Concession Regulatory Commission (ICRC). The federal government will now dredge the river or the Concessionaire would and recover the costs over time.

So today, we have the 2nd Niger Bridge finally built and the Onitsha River Port finally activated and concessioned meaning that barges can now pass under the bridge into Onitsha River Port; all made possible by President Buhari in record time. Think about the huge benefits and the ripple effects to the South East and the rest of Nigeria.

And all Buhari gets are denials, distortion of facts, abuse and discredit?

Thankfully, Buhari is not interested in commendations. He is doing what he believes is right for the nation and posterity will judge him. We only acknowledge and commend for our own human dignity, sense of decency and conscience.

©️ Uche Diala is the Coordinator, Buhari Hang Out