Why Falconets slept on floor at Istanbul Airport - NFF 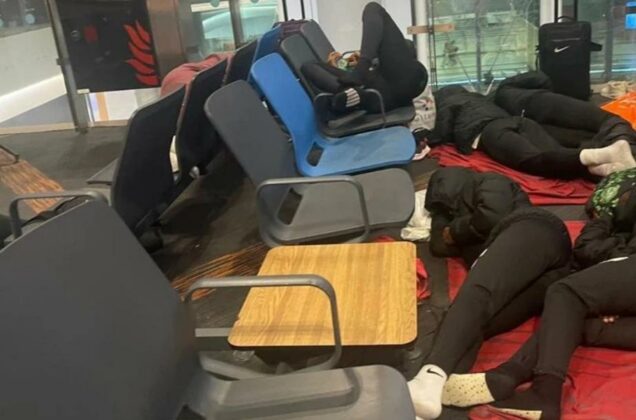 Falconets sleeping on the floor at Istanbul Airport

The Nigeria Football Federation (NFF) on Wednesday gave clarification of Nigeria’s U-20 Women’s team, Falconets overstaying for 24 hours at Istanbul following their exit at the Women’s World Cup in Costa Rica.

Falconets were enroute Abuja after bowing out of the tournament on Sunday, following a 0-2 loss to Netherlands in the quarter finals stage.

Pictures of the team sleeping on the floor at the Istanbul Airport surfaced on social media with fans blaming the Federation for negligence.

However, Demola Olajire, NFF’s Head of Communications, said in a statement, that the situation was due to inability to secure transit visas for the team.

Olajire also reported Mohammed Sanusi, General Secretary of the NFF, as saying that the tickets were booked by FIFA and not the federation.

“The NFF did not book the team’s tickets from Costa Rica, FIFA did.

“FIFA also did not envisage the hitches that saw the team delayed for more than three hours in Bogota, and another one hour in Panama. By the time the team got to Istanbul, the flight to Abuja had left.

“Our officials pleaded for compassionate transit visas to take the players and officials to a hotel inside the town, but this was not possible.

“They were informed that Nigeria had been removed from the list of countries whose citizens were issued visa-on-arrival in Turkey.

“The airline then took the team to a sleeping area at the airport and gave them tickets to have meals every five hours.

“This situation has nothing to do with NFF, who had made arrangements to receive the team in Abuja before the complications in travel arrangements,” Sanusi explained.

Olajire also added that the NFF had implored FIFA to intervene with the Embassy of Germany to issue the team transit visas before their departure from Nigeria, for the team to travel through Germany, but failed to happen.