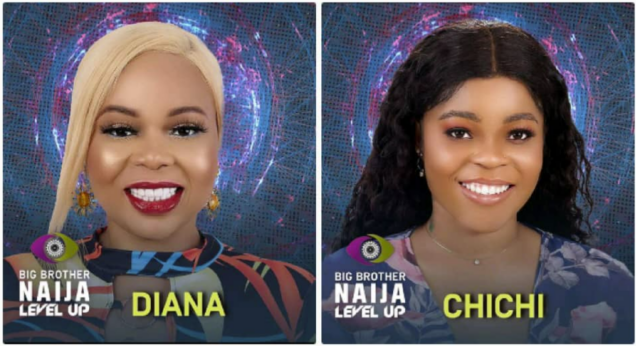 Chichi and Diana, the two housemates of the BBNaija Season 7 Level Up show, have reconciled after a nasty fight on Sunday.

Drama ensued on Sunday night after the eviction show because Deji gave Diana a space in his locker, which got Chichi jealous.

Before the fight, Chichi told Phyna, “I’m not just a lover, I’m a fighter.” Why didn’t she ask me before she put her things in Deji’s locker?

“If she wants to play dirty, I’m ready.” I’m an eagle, but I can go dirty to feed. When I’m done feeding, I’ll fly high to where I belong. It’s like she wants to fight me indirectly, but I’m going to fight her directly if that’s what she wants.

“Why is she leaving her things in his locker?” If she does not want to be reasonable, I’ll not be too. I’m prepared for you, Edo girl, like me. You can’t do it to me anyhow, like other people. I wouldn’t accommodate you.

“Don’t even try me. I will not touch you, but with my mouth, I’ll scatter you into pieces. My personality brought me this far; I’m not letting anyone take that away from me. ”

However, things escalated as Diana heard everything and approached her. Chichi was punished by Biggie for provoking and goading Diana during their argument.

Four days later, Chichi met with Diana to have a heart-to-heart conversation and apologise. Watch the video below.