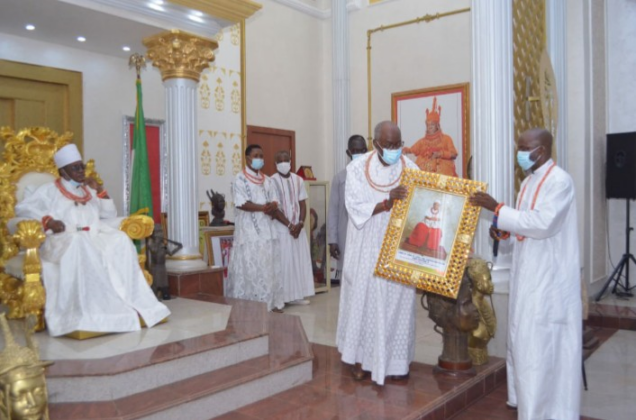 Benin Monarch, HRM, Oba Ewuare II, and members of the Benin Community in Abuja, led by its President, Lucky Odigie who, paid him a courtesy visit in his Oba palace on Thursday

The Benin Monarch, HRM, Oba Ewuare II, has warned against attempts by anyone or group of persons to divert all Benin artifacts repatriated from foreign museums.

The Monarch who sounded the warning on Thursday when members of the Benin Community in Abuja, led by its President, Lucky Odigie, paid him a courtesy visit in his Oba palace in Benin City, added that Edo people would resist any such move before.

It would be recalled that the Monarch had asked the Nigerian government to temporarily take custody of the 1,130 stolen Benin artifacts in Germany after they are repatriated, pending the completion of the Benin Royal Museum where the artifacts which have created a wave of public support would be kept.

The traditional ruler who spoke in Benin language, commended “notable Nigerians” who took up the agitation for the return of the art works.

He noted that there is no controversy over the ownership of repatriated Benin bronzes or who should take possession of them, since they were produced centuries ago on the mandate of his forebears in Benin Kingdom.

“We won’t lose our heritage. You remember our Benin artifacts that were looted during the invasion of Benin by foreigners. Some of them have agreed to return them. But, it should be returned to the Oba of Benin palace.

“Edo people all over the world should not allow anyone to bamboozle them to give up their heritage to strangers. Benin artefacts were made by the famous Igun Bronze Casters’ Guild in Benin on orders of our forebears. The palace gave them the enablement and approval to make them.

“Our artifacts will not go to another destination. It should come to the right destination, which is Oba of Benin palace. Edo people should not allow them to be either diverted or sold. Edo people will not allow that to happen. Our ancestors do not approve it.

“Advice your supporters and others to counsel those who are making such moves to retrace their steps. You should insist that the right thing is done at the right time for the benefits of Edo people,” Oba Ewuare said.

He therefore charged his loyal subjects and concerned authorities not to succumb to pressure by unnamed individuals who are treading on a lonely path to either divert or sell the priceless treasures for personal gains.

In his remark, the President of Benin Community in Abuja, Mr. Lucky Odigie, commended the peaceful reign of the Oba and his proclamations that led to the abolition of Community Development Associations (CDAs) as was as visible respite in curbing social vices in the society, particularly prostitution and human trafficking.