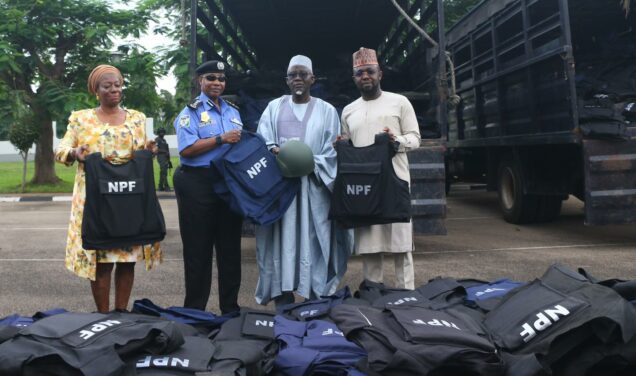 The handing over was performed at the Nigeria Police Force Headquarters, Louise Edet House, Abuja.

According to him, “It thus reinforces this administration’s focus on equipping Nigeria Police with necessary gadgets that will protect, and instill confidence in its personnel to tackle all forms of criminalities in the country.

He noted that the recent successes recorded by the Nigeria Police in its offensive operations against mindless criminals, and dislodgement from their hideouts necessitate the need to equip police personnel with protective gadgets in line with international best standard practices.

Dingyadi urged officers and men of the Nigeria Police, to continue to put in their best in discharging their duties to the nation, and to adhere to the rule of engagement and protection of citizens’ rights to reclaim dwindling trust and confidence from the populace.

He added that the equipment will assist the Nigeria Police Force in their operations against banditry, criminals, kidnapping, and 2023 elections as well as give the officers in the field confidence and protection during operations.