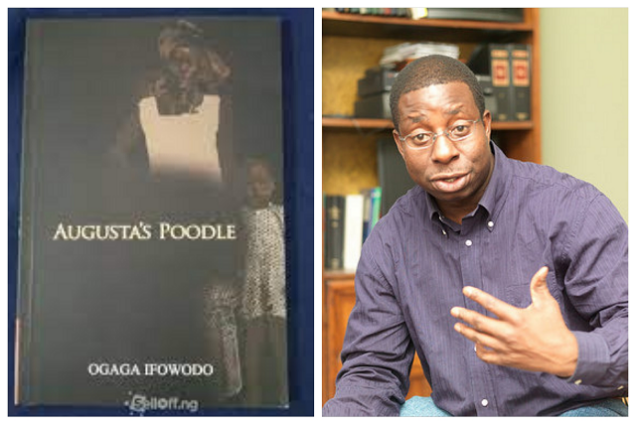 Ogaga Ifowodo and his Augusta’s Poodle

The child is father of the man; and I could wish my days to be bound each to each by natural piety – William Wordsworth

The greatness of a literary work lies in the writer’s ability to make his individual experience a collective one; in his ability to make the reader relate not only to his work but also be engaged by it and be immersed in that aesthetic experience.  And this is what Ogaga Ifowodo, poet, lawyer and activist, has succeeded in doing with his latest collection, Augusta’s Poodle. Ifowodo has not only made us part of his childhood experience but he has also made us own it.

Own it? Sure. Though the poet once said in an interview that Augusta’spoodle is “a recollection of childhood, a journey into the past to thread into a narrative spool those memories that have managed to survive the fog of forgetfulness, to re-experience the sense of awe, wonder and elation which the child discovers and enacts his being in the world,” it is more than that. It is more than just a mere recollection of childhood in the sense that it is not just his childhood but ours as well. It is not just his childhood but that of his people, the people of the Niger Delta.

Singing about his experiences growing up, the poet also reminds us about the collective experience of everyone who ever tasted childhood like the succulent coloured fruits of his natal days (and who didn’t by the way?), that childhood innocence, vulnerability and sense of wonder about a world peopled by beings (both human and supernatural), rivers, flora and fauna, a world peopled by storied beings and things beyond our comprehension at the time.

A child is always a child, no matter where the placenta was planted or where it (the child) is growing up.  It is that universalist sense, that strange familiarity that feels like déjà vu, that  Ifowodo has demonstrated and conveyed with Augusta’s Poodle. In the writer’s world, everything, whether animate or inanimate, tangible or intangible, comes alive; and the imageries are so palpable and metaphors so strong that the reader cannot but feel them and be drawn to them.

“What I am doing in Augusta’s poodle is to return to childhood, my earliest childhood up to the age of 12, to raise the submerged sensations of that past, thereby commemorating flora and fauna, places and phases, rites and rituals to renew allegiance to it,” Ifowodo once said in an interview.

Asked at the NNLG/ CORA Book Party in Lagos what inspired him to write the book, the poet spoke about how he experienced displacement at such a tender age when life happened to him. His father died when he was a year old and was forced to relocate with his mother. And of course, that is the reason he is his mother, Augusta’s poodle: “My aim here has no grander manifesto than to recapture some memories, a rather usual, relatively speaking, childhood. Like I said, I was born in one place and open my eyes to the sun in another. My father died when I was a year old. So my mother left my father’s hometown to my mother’s hometown, which is where I grew up.

“And sharing my time between the village and the city, it made me see life in a different way. And because as post-colonial, as people who had to live under colonialism and imperialism and its ideology of denying the colonized place, history, identity and culture I felt it as a mission to by recapturing those experience of childhood thereby commemorating and representing, thereby affirming identity and place.  Of course, in every coming and going, in every displacement, there is always a return to one’s village. Just as T.S Eliot said, “”a man’s destination is his own village.”

A very important feature of the book, which must not be ignored and which makes it stand out, is that it has satisfied the reader both in terms of form and meaning. As form, the 55 cantos in the collection, divided into three movements, are related and each of them represents a year in the life of the poet. The poet himself confirms this in the prologue of the book. “And I have rendered it in fifty-five cantos, for this is a song of myself as composed by the many selves of a five-and- a-half decade existence,” Ifowodo said.

As meaning, it is a recollection of not just the poet’s childhood, but also anyone’s – that sense of awe and wonder, and as the poet himself puts it, “the surprise and elation of becoming conscious of one’s existence as an autonomous being.”

Still, one of the writer’s major strength is his uncanny ability to take us into a world of wonder as experienced by a child. For instance, the writer gives the reader a foretaste of the magic experience, that sheer delight of waking up to something memorable, in the opening canto of the 55 cantos that make up the collection. I wakened to the soft-green-filtered light / of my second residence on earth, some place / unknown to the wider world; the orange trees / had ripened to that yellow green/ of enchanting juice pressed from the pulp/ by both hands of a child …

In the 9th cantos, the writer makes the reader experience this sense of wonder, even against the backdrop of the Nigerian civil war. The poet sings: I saw a soldier and a motor-car / for the first time in front of Ugbo’s compound; / One of Eze’s sons had joined the army / (no surprise, the forebear’s name means courage) ; he came in a grim and grey Land Rover.

And if you delve deeper you would recognise the fact that while singing about his childhood experiences, the poet also sings about the sight and sound of the Niger Delta, where the poet comes from. By singing and telling the stories of the Isoko people, the poet also sings of the sight and sound of Niger Delta, an area rich with flora and fauna, folklore and magic, mythical beings and legendary warriors, rites and rituals; thereby affirming identity and place.

The poet’s ability to tell his story so vividly is worthy of note. Here we are made to feel the beats of the Isoko people in the Niger Delta, as they interact with one another. We are made to experience mythical beings and their environment (mud houses, farmlands, creeks and freshwater fishing ponds), and legendary characters like Pa Ukuevo, “who lived the bounty of his name”; Pa Edhemuno, “who was slight of build, steely in mind”; and Oneroha, who “swelled with the strength of seven warriors”.

A significant thing about Augusta’s Poodle is that, apart from its aesthetics, the reader is taken on a journey into a world that is strangely familiar but no longer present, the idyllic world we all seem to have lost, as the author tells the story of his life’s journey in three parts: 1. First Residence, which was the second. 11. Second residence, which was the first and 11. Ramdom Recollections. His kind of pastoral poetry reminds one of Thomas Gray’s Elegy Written in a Country Churchyard and William Wordsworth’s Ode: Intimations of Immortality (from recollections of Early Childhood.

The power of Augusta’s Poodle, therefore, lies not only in the poet experiencing a world long gone but in his bringing back that world through remembering and memory, remembering not just his childhood but also that of us all. And as Ifowodo said, “The idea is that whatever survives forgetfulness, that does not resist recall, is something worth recounting. And the hope is to commemorate the rites and rituals, the faces and places and the flora and fauna that shaped the poet’s earliest consciousness.” For example, the poet sings of Emete-ame and medicine men and snake charmers in the 12th and 17th cantos.

Emete-ame. Watermaidens who for their beauty / or divine covetousness are chosen devotees / of the water goddess. For a boy yet to crack / the mysteries of water and float in it; their processions to Eterobo, those lucky / days, were solemn rites that taught me, / perhaps too early, the profaning aura, of altars.

Ovunuvboye. Everyone comes of a lineage; / his, of medicine men and snake charmers – / or so it had to be: such frightful powers / come handed down from times lost in mists / beyond memory.

Ifowodo has once again demonstrated in Augusta’s Poodle, the lyricism of his poetry, his mastery of metaphors, lines that dance as well as imageries that bop up and down in a rhythmic manner. The book is indeed a sheer delight. And since he has succeeded in making us know what it is to be and feel like a child and to be displaced due to no fault of ours and still go back to one’s origin to affirm identity and place, I recommend this book to everyone who loves good poetry and wants to be engaged by it.

Nehru Odeh, journalist and writer, is the author of The Patience of an Embattled Storyteller.