Haaland grabs hat-trick as Man. City came from behind to thrash Palace 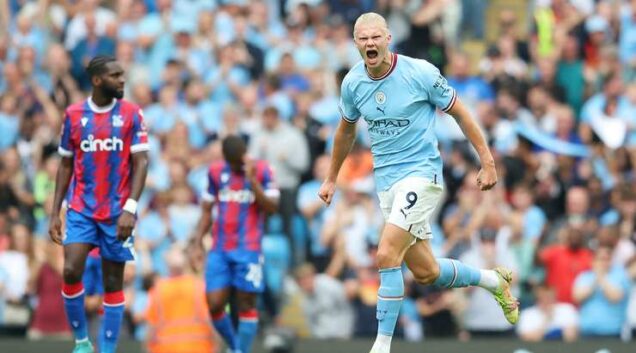 Erling Haaland grabbed his first hat-trick in the English Premier League on Saturday as Manchester City came from behind to beat Crystal Palace 4-2 at the Etihad Stadium.

The host were down by two goals in the first half, as Palace looked to continue their dominance over City just like last season.

An own-goal by John Stones on fourth minute meant City trailed at the Etihad Stadium.

The visitors doubled their lead on 22 minutes through Joachim Andersen.

The ball was swung into the box by Eberechi Eze from the corner kick. He perfectly found the head of Andersen, who planted a bullet header inside the left post to make the score 0-2.

The homers came back stronger in the second half as Bernardo Silva pulled one back. He got a shot away from the edge of the box and scored into the bottom right corner. Rodri provided an assist for the goal.

Haaland equalised for City after a perfect lofted pass from Phil Foden found him, jumping highest and steered a close-range header into the right side of the goal.

His effort was both strong and precise, and Guaita had no chance of stopping the ball.

Eight minutes later, the City striker simply tapped in the ball to make it 3-2.

John Stones put the ball across the area and Haaland had the easiest task in the world to tuck the ball into an empty net.

He got his hat-trick on 81st minute after a great through ball by Ilkay Gundogan set him up inside the box, and he made no mistake and bang the ball into the bottom left corner to make it 4-2 for the homers.