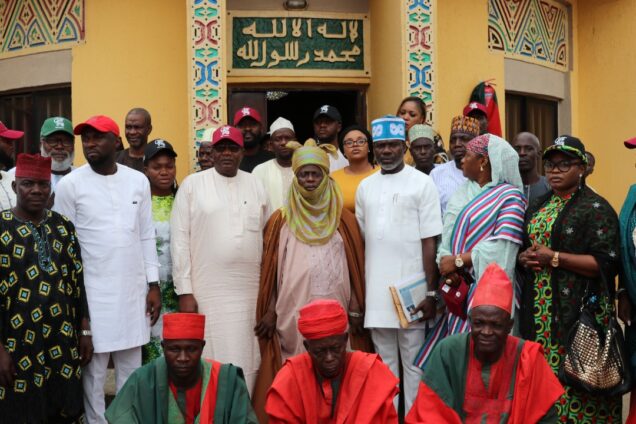 A political support group, the City Boys Movement, said Nigeria needs the doggedness of the Presidential Candidate of the All Progressives Congress (APC), Asiwaju Bola Tinubu, to move its economy to greatness.

The BoT Chairman of National Coalition Group (NCG), Mr Francis Shoga, said this during a courtesy visit to the palaces of Mai Girma, the Sapeyi of Garki, Abuja, Dr Usman Ngakupi; and the Agaba of Jiwa, Alhaji Idris Musa, on Friday.

The group, in a statement by its Director of Media and Publicity, Mrs Aminat Aminu-Isah, in Abuja on Friday, quoted Shoga describing TInubu as a dogged man and a detribalised Nigerian.

Shoga said that the movement believes in the capacity of Tinubu as the only candidate that could change the fortune of Nigeria.

He highlighted some past achievements of Tinubu to include free education, infrastructural development and free medical outreach.

“Tinubu is a dogged goal-getter. His doggedness is what led to a new Lagos, giving him a chance as Nigeria’s president is equivalent to giving Nigeria a facelift and rays of hope,” Shoga said.

The NCG BoT chairman said there was a need to support the presidential ambition of Tinubu to succeed President Muhammadu Buhari in 2023.

He described the visit as part of efforts to strengthen and foster the group’s relationship with all relevant stakeholders toward the victory of Tinubu ahead of the 2023 general election in FCT.

Shoga said that the visit would cut across other states of the federation to deepen consultations with all necessary stakeholders.

He said that they were in Abuja to intimate the traditional rulers on the group’s mandate and to seek support for Tinubu.

“Tinubu is a dogged goal-getter. His doggedness is what led to a new Lagos, giving him a chance as Nigeria’s president is equivalent to giving Nigeria a facelift and rays of hope,” Shoga declared.

Abdullahi said that having considered all candidates that emerged from all political parties’ primaries, Tinubu remained the man with the requisite leadership skills and experience.

He said that as a former governor of Lagos State, Tinubu set an unprecedented blueprint that the successive governors had continued to enjoy.

Abdullahi solicited the blessings of the traditional institution for Tinubu’s presidential ambition, describing the APC candidate as the only man who can lift Nigeria to a lofty height.

“He has the best credential among other presidential candidates.

“His landmark achievements as governor of Lagos State are there for verification. He is the pathfinder of the infrastructural revolution you see in Lagos today. He set the pace and others follow.

“With Tinubu as the President in 2023, Nigerians are assured of Economic and Infrastructural development.

“What this country needs now is someone who can revolutionise our country and that is what Tinubu is bringing to the table,” Abdullahi said.

On his part, Ngakupi described Tinubu as a man of the people, known home and abroad with a robust track record and footprint in Lagos state and other parts of the nation.

Ngakupi, therefore, urged Nigerians to continue to pray for TInubu, his running mate and their 2023 ambition.