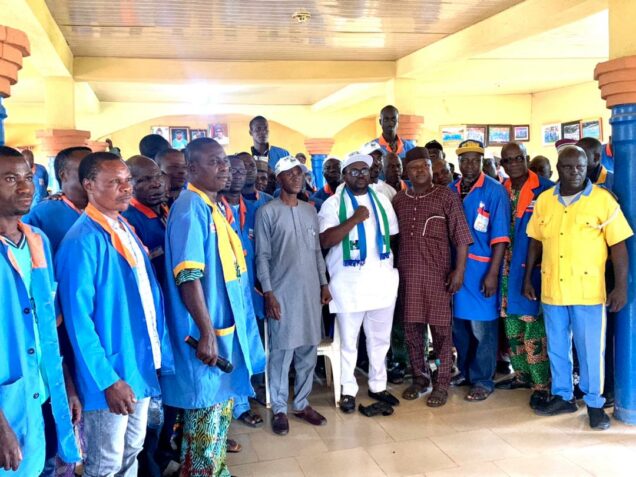 The group gave the endorsement on Friday when Ajadi paid a visit to the association.

Speaking during the visit, Ajadi promised to lift the association upon coming into power.

Ajadi said the promotion of the automobile industry was high on his agenda given the need to support not only the operators in the industry but also to enable them to contribute maximally to Nigeria’s industrial and artisan development.

The NNPP candidate announced to the association, that he had, as a matter of fact, earmarked a site where the state’s NATA could eventually be located.

The move he said, was informed by his realization of the important role that the association and its members could play, not only in mechanical service delivery but also in job security.

According to him, NATA and other critical industrial clusters and unions would be accommodated in the NNPP regime in the state.

“Your association is worth having an office in the State House and we will make sure that it is done when we get to the office in 2023.

Earlier, the Director General of the candidate’s campaign organization, Honourable Tunde Oke, had described NATA as a viable organization making its contribution to the state and the nation, emphasizing its critical importance in the socio-economic and business life of the people.

He said the All Progressives Congress (APC) government in the state, had not been faithful to the organization as the government, preferring automobile technicians from overseas rather than the one at home.

“The present government has denied the automobile technicians and their industries but we are here to tell you that your dividend will be given back to you,” he said.

He said an Ajadi-led government in the state would do otherwise, bringing NATA to the mainstream of its activities.

He also underscored the importance of voting in someone like Ajadi with youthful zeal and energy as well as the commitment to take the state forward.

Speaking at the event, the State Chairman of the association, Adeleke Balogun, said aside from the number of members on the ground at the event, that there were several others in the grassroots with NATA present in the different local governments of Ogun.

He added that the information about Olufemi Ajadi would be disseminated to various zone, and local governments, assuring NNPP that NATA members in the state would only vote for Olufemi Ajadi in the 2023 general election.