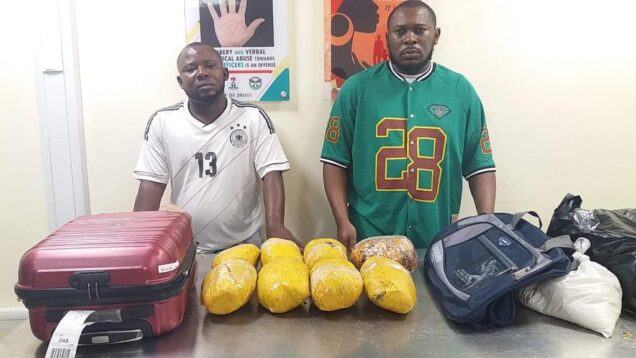 Operatives of the National Drug Law Enforcement Agency, NDLEA, have arrested a cleaner at the Murtala Muhammed International Airport, MMIA, Ikeja, Lagos, Ohiagu Sunday, who leads a drug syndicate at the international wing of the airport.

Femi Babafemi, NDLEA spokesman, in a statement on Sunday said the suspect was nabbed on Tuesday, 23rd August following the arrest of an intending passenger on Airpeace flight to Dubai, UAE, Obinna Jacob Osita who was arrested with three bags, two of which contained eight blocks of cannabis sativa weighing 4.25kg concealed in cassava product, gari and crayfish.

“One other member of the airport syndicate who works with Ohiagu has also been arrested while operatives are after another suspect.

”Investigations revealed that a Dubai-based drug dealer recruited Obinna, a 42-year-old native of Oyi Local Government Area, Anambra State to traffic the drugs and equally contracted Ohiagu, a 34-year-old airport cleaner from Orlu West Local Government Area of Imo State to create access for the unhindered passage of the trafficker,” he said.

Babafemi added that the drug syndicate bust, which was the first drug arrest at the new terminal of the MMIA came on the heels of the seizure of a consignment of bottles of viju and fearless energy drinks used to conceal skunk for export to Dubai, UAE through the NAHCO export shed on Monday 15th Aug, saying that a freight agent has already been arrested in connection with the seizure.

“In the same vein, attempt by a syndicate to export illicit drugs through the Lagos airport on Wednesday 24th Aug was foiled during an outward clearance of passengers on Ethiopian Airline to Oman via Addis Ababa.

”A suspect Jonah Chukwuemeka was arrested with a total of 1,995 Tramadol tablets with a gross weight of 900 grams hidden in locust beans in his luggage.

”The bag containing the illicit substance was handed over to him at the airport by one Olagunju Abbas who was promptly arrested.

”Packs of Tramadol 225mg containing 119,500 capsules were Thursday 25th Aug transferred to NDLEA by the Nigeria Customs, cargo wing of MMIA. The consignment had come in through Ethiopian Airline from Pakistan,” he said.