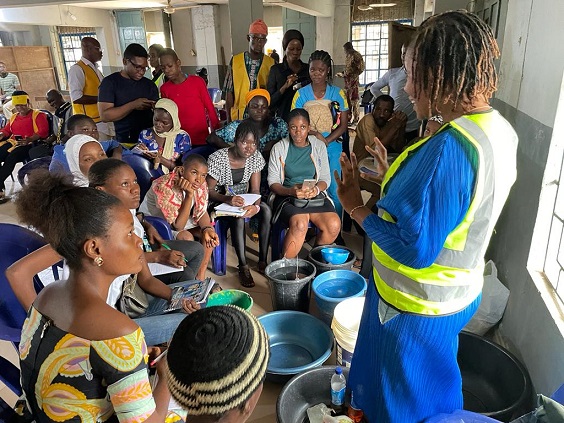 Lions Club International 404B1 has trained 205 youths in various vocational skills in Abeokuta, the capital Ogun State as part of its bid to help eradicate poverty in the country.

The international club said the one-day training became imperative to reduce crime in the state and in response to the state of the country.

Speaking to newsmen during the training,e President of Abeokuta Unique Lions club, Lion Temitope Ayodeji Olabimtan also said the initiative is part of the activities of the club aimed at helping help the needy in the society.

He added that the core call of Lion Club is to reach out to the less privileged people in the state and country,hence the reason for the empowerment.

“We are trying to imbibe entrepreneurship skill in the youth, we are trying to make them self dependent by training them on tie and Dye, make up and Soap making.

“In Lions Club we reach out to the less privilege every month, and in this month we taught it wise to empower the youth by given them a skill which they can always look forward to,a knowledge acquire can not be waste.”.

“Also with the situation of Nigeria as at today unemployment , Poverty is the major problem we are facing in the country We believe that we could change and recruit our youths on how to make money and add value to them in the future”

Meanwhile, every year we carry out world sight day, where by we employed doctors they do free eye screening for people in massive and those glasses shall be given and those that need for eye surgery we all sponsored them.”

Meanwhile the training was jointly done with other sister clubs whose presidents were also present.