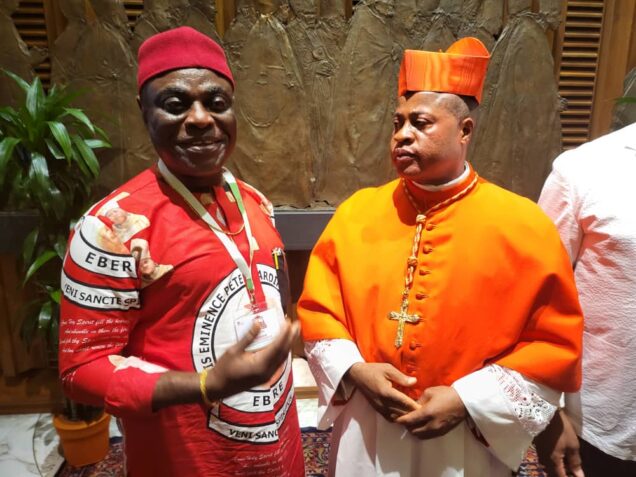 Dr Victor Oye, National Chairman of the All Progressives Grand Alliance (APGA), has joined millions of Catholic faithful in Nigeria to congratulate Bishop Peter Okpalaeke of the Diocese of Ekwulobia on his elevation to the rank of cardinal.

Okpalaeke was installed as a cardinal by Pope Francis alongside other 20 bishops in a consistory held at the St. Peters Basilica, Vatican City, Rome on Aug. 27.

In a message made available to newsmen on Sunday, Oye who was in Rome to witness the installation of the new cardinals described Okpalaeke as God’s gift to Nigeria.

He thanked the Pope for finding Okpalaeke, who hails from Anambra, worthy of the elevation.

He said it was a sign of greater things to come to the state and the country.

According to Oye, Okpalaeke’s shining qualities of humility, steadfastness, courage, godliness and patience in the face of adversity stood him out.

“I pray to God for continued grace and humility in his (Okpaleke) service to God and humanity as he assumes a greater role in His vineyard,” he said.

Oye also felicitated the Governor of Anambra, Prof. Chukwuma Soludo and the people as the state marked the 31st anniversary of its creation.

He said Anambra had experienced consistent harmony, progress and development under APGA since 2006, adding that “for Anambra, it is so far so good”.

He urged Soludo to remain focused and implement the people-oriented manifesto of APGA for the greater good of the larger number of people.

He called on Anambra residents to give the governor maximum support.

Bishop Okpalaeke, the second cardinal of Anambra origin after Francis Cardinal Arinze was born on March 1, 1963, at Amesi in Aguata Local Government Area of Anambra.