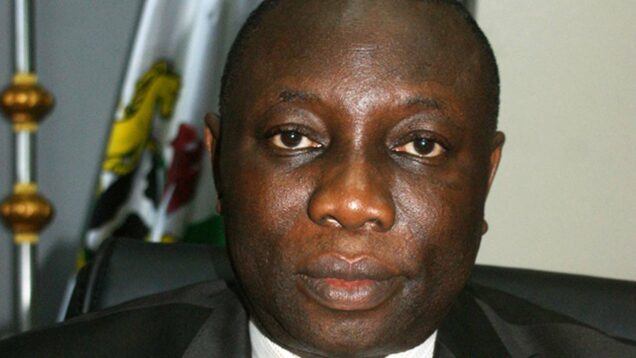 Okowa, the Vice-Presidential Candidate of Peoples Democratic Party (PDP), in a statement on Sunday described the appointment of the Delta-born legal luminary to the exalted position as well-deserved.

He noted that Azinge’s antecedents as a distinguished academic and quintessential legal icon make him fit for the position in statement signed by his Chief Press Secretary, Mr. Olisa Ifeajika/

Okowa urged Azinge to bring his wealth of experience to bear on his new job.

The governor also lauded him for his achievements as an eminent “learned gentleman” in Nigeria and Africa.

While wishing Azinge successful tenure in office, Okowa expressed confidence that the new president of the Commonwealth tribunal would use his office to ensure that the objective of CSAT was realised.

The statement noted in part, “On behalf of the government and people of Delta, I congratulate our illustrious son, Professor Epiphany Azinge (SAN), on his appointment as President of Commonwealth Secretariat Arbitral Tribunal.

“Given the antecedents of Prof. Azinge as a brilliant and cerebral lawyer, I have no doubt that he will bring his wealth of experience to bear in improving activities at CSAT.”

Azinge, was a former Director General of the Institute of Advanced Legal Studies,

“If you are able to accept the terms set out below, your appointment as President will run concurrently with your second and final four-year term, as a member of the Tribunal, taking immediate effect and expiring on May 31, 2023.

“As President of CSAT you are entrusted with the timely discharge of the functions and responsibilities attributed to your office by the Statute and Rules of the Tribunal. This includes empanelling the Tribunal to hear applications brought by members of staff of the Commonwealth Secretariat, or any other persons over whom the Tribunal has jurisdiction, alleging the non-observance of their contract. The President ordinarily presides over the Tribunal, so empanelled.

“You shall be assisted as President by the other members of CSAT and supported by the Executive Secretary to the Tribunal. Service as President of CSAT is largely honorary and unremunerated.”

“I look forward to receiving confirmation of your acceptance of this appointment, and offer my warm congratulations on your selection. With all good wishes.”