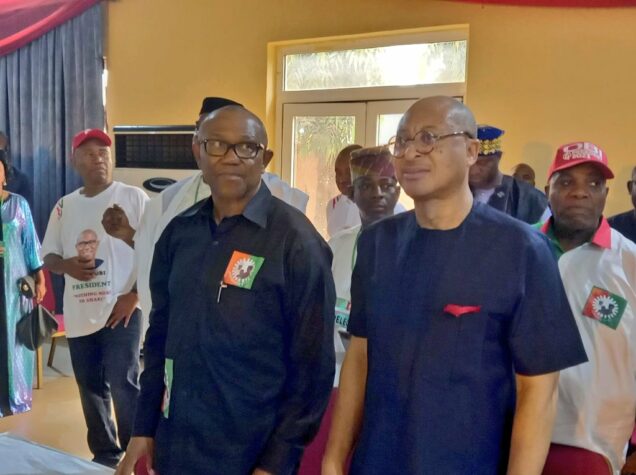 The leadership of Labour Party is at war with one Fabian Ihekweme who claimed to have been appointed the Imo State Coordinator of Obi-Datti Presidential Campaign Organisation allegedly inaugurated by Prof Pat Utomi.

Utomi, one of the supporters of Peter Obi 2023 presidential ambition had also ran into trouble with the party recently when he announced the appointment of a spokesperson for Obi-Datti presidential campaign.

The National Chairman of Labour Party, Julius Abure, had in a statement not only disowned the spokesperson, he queried the power of Utomi who was operating under the so called Big Tent – a coalition of groups supporting Peter Obi presidential ambition to make such appointments.

In another flare up of what is turning out to be a silent battle for control of Obi’s presidential campaign,the leadership of Labour Party on Sunday accused the Imo State chairman of Obi-Datti Campaign Organisation, Iheme of engaging in ‘clandestine conspiracy and fraudulent activities.’

The party, in a statement issued in Abuja on Sunday by its National Publicity Secretary of the party, Arabambi Abayomi, accused Ihekweme of running his Imo State platform unilaterally and outside the party.

Fabian was also accused of making wrong claims that a candidate is free to independently set up a campaign team, free from the political party that presented him as a candidate.

But Labour Party, in the statement affirmed that it is the only authority on every aspect of the processes that are connected with the campaign for its legally presented candidates.

The Labour Party said, “Our attention has once again been drawn to a very clear act of fraudulent activities of one Fabian Ihekweme, the illegal Imo State Chairman of Peter Obi/Datti presidential campaign council through a committed, deliberate and conscious mission to run Labour Party into a complicated set of sectoral and serial fraud through obtaining money under false pretext with the sole objective of compromising Labour party victory in the 2023 general election.

“His provocative and highly contemptuous press statement addressed to media organisations would have been ignored with its puerile contents but for the fact that silence is thought to mean consent in all ramifications.”

“Fabian in his very pitiful and totally arrogant, ignorant and pedestrian understanding of the constitution failed in his attempt to bring the party to some silly ridicule by making wrong claims that a candidate is free to independently set up a campaign team, free from the political party that presented him as a candidate.

“This and many primitive insinuations fuelled by ignorance were expressed in his so sinfully anti-Party misdemeanour of a state. He didn’t even stop at the foregoing as he went ahead to hand out threats to the leadership of the party.

“Furthermore, National Chairman of Labour Party, Barr Julius Abure, has declared that any further deliberate and criminally inclined infraction by anyone or group of people that in any way invite ridicule to the Party and its goodwill shall be reported to the office of the Inspector General of the Police and of course.

“This is not limited to Fabian Ihekweme because criminal conducts as exemplifies by the Imo State impersonator thinking he is better placed or superior to the National Chairman and the NWC is not only highly disrespectful with gross insubordination but any further occurrence will leave the party with no option than to order the arrest of the perpetrators,” he said.

But Ihekweme fired back immediately. He insisted that the Imo campaign council was duly inaugurated by Prof. Pat Utomi.

He insisted that it is the prerogative of a nominated candidate of a political party to set up his or her own campaign team with the party playing little or no role in the determination of the key actors in the campaign council at any level.

He pleaded with leadership of the leadership of Labour Party and critical stakeholders at all levels to desist from demarketing Peter Obi in Imo state.”

Ihekweme said, “It is important to put the records straight at this stage to avoid widespread misconceptions and wrong notions. On behalf of the Imo state Presidential Campaign Council for Peter Obi-Ahmed Datti, it is my singular honour to make the following clarifications with the view of strengthening our campaign and also to purge and disabuse the minds of our reading public on the false insinuations by a few detractors and disobedient elements who are direct beneficiaries of the current failed leadership and now trying to hide under the striking names of Peter Obi and Ahmed Datti to advance their own selfish political interests and advantages.

“I have refused to be dragged into this unnecessary and unwarranted supremacy battle with Imo LP leadership which claims to be acting on a directive from the National Secretariat of the Party to disown the constitution and inauguration of the Imo State Presidential Campaign Council.

“We have evidently raised the bar of our campaign in Imo state to a new and enviable height. We do not need any distractions at this point in time. There is no debate about the fact that there is no conflict of interest between the party administration and campaign council in any flourishing democracy anywhere in the world.

“It is the prerogative of a nominated candidate of a political party to set up his or her own campaign team. The party sometimes plays little or no role when it comes to the determination of the key actors in any campaign council at any level.

“I do not want to believe that opposition elements have infiltrated and penetrated certain persons within the rank and file of LP both at the state and National levels.

“As the State Coordinator for Obi-Datti Presidential Campaign Council Imo, I hereby plead with the leadership of Labour Party and critical stakeholders at all levels to please desist from demarketing Peter Obi in Imo state.”