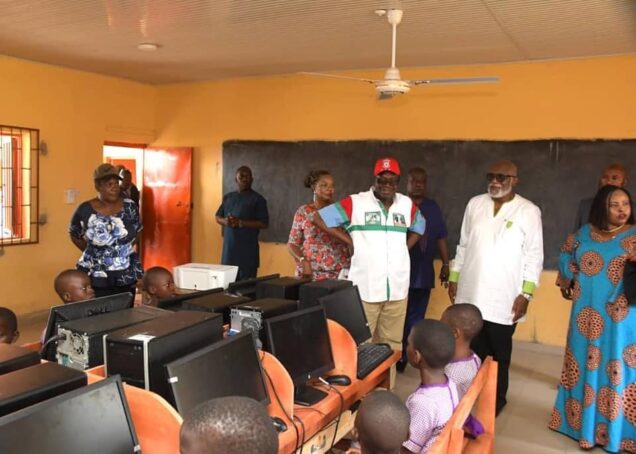 Governor Akeredolu inside a public primary school in Ondo State

The Ondo government has said there is no policy or law forbidding anyone in the service of the government, including teacher, from enrolling their wards in any school of their choice.

The State government said this while clarifying a viral report that Governor Rotimi Akeredolu has declared that it is an offence for teachers in public schools in the state to enrol their wards in private schools.

The statement credited to the Chairman of the State Universal Basic Education Board (SUBEB) Victor Olabimtan.

But while clarifying the assertion, Richard Olatunde the Chief Press Secretary to the Governor of Ondo State in a statement issued on Sunday evening said while there is no law compelling teachers to put their wards in public schools, there is a place for moral burden.

He added that teachers and other residents of the state are being urged to enrol their wards in public schools because of the huge investment of Governor Akeredolu in provision of infrastructure at all levels of education in the past seven years.

The statement partly reads: “Undoubtedly, the Ondo State Government under Governor Oluwarotimi Akeredolu,SAN, has made huge investment in the education sector in the state, especially in Primary and Secondary Schools. Tertiary institutions not excluded. The rot, which pervaded public schools in the state before the Akeredolu administration assumed office is fast disappearing.

“This has also led to increase in student enrollment in most of the schools.

“Under the Akeredolu administration, over 800 Public Primary Schools have been reconstructed and renovated with perimeter fence, ICT center and play group equipment.

“The students now enjoy modern desks and chairs procured by the Akeredolu administration. Besides, Governor Akeredolu recently recruited over one thousand teachers in the Public primary schools.

“It is based on this background that teachers in the public schools were urged on moral ground to enroll their wards in public schools for confidence building. This will subsequently increase enrollment and further encourage government to embark on more upgrade of public schools.

“Succinctly, there is no policy or law in Ondo State that forbids anyone in the service of the government, including teacher, from enrolling their wards in any school.

“However, there is always a place for moral burden. It is, therefore, not an offence for teachers to enroll their wards in any school of their choice. But, it will be morally wrong for teachers, who are proud of their works and teachings to put their wards in a private school.

£Finally, Governor Oluwarotimi Akeredolu,SAN, will continue to prioritise education and develop it for the overall interest of the people of the state. It is the belief of the Governor that qualitative education is the key to a better tomorrow.
Signed: