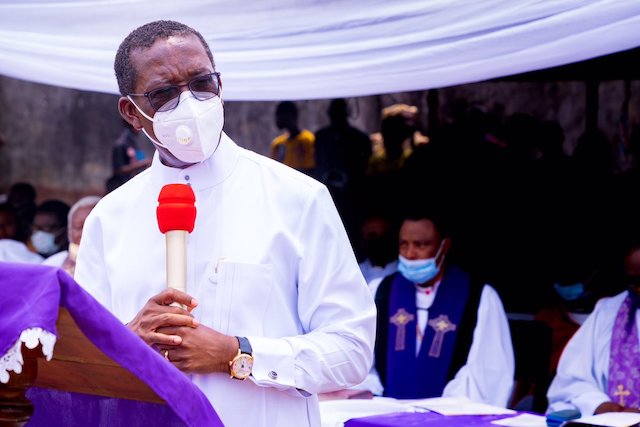 Delta Governor and Vice-Presidential Candidate of the Peoples Democratic Party (PDP) has commended the Federal Government for awarding oil facilities surveillance contract to a firm owned by Chief Government Ekpemupolo,(Tompolo) an indigene of Niger Delta.

He said that the award indicated that the government heeded his advice for a review of oil facilities surveillance contracts to involve oil-bearing communities to check rising cases of oil theft, which he gave when a Federal Government delegation on oil-theft issues visited him recently in Asaba.

The governor pointed out that giving the job to people from Niger Delta would give them a sense of belonging and help to curtail the rising incidence of oil theft with its attendant effect on the nation’s economy.

Chief Press Secretary to the Governor, Mr Olisa Ifeajika, gave the commendation at a news conference, on Tuesday, in Asaba, and said that it was high time host communities, which suffer severe impacts of oil exploration and exploitation in the region were partners in the process and benefited from the proceeds.

According to him, giving surveillance contracts to indigenes was the way to go since they know the terrain very well and would put in their best to guard the facilities.

“A few weeks ago, the Federal Government delegation was here in Delta led by Minister of State for Petroleum, Chief Timipre Sylva; Chief of Defence Staff, General Lucky Irabor and the Managing Director/CEO of the NNPC Limited, Mele Kyari and other stakeholders visited Governor Ifeanyi Okowa.

“Their mission was to ask the governor as a stakeholder in the Niger Delta, to assist in whatever way to curb, if not end, oil theft that according to them was sabotaging our economic re-engineering.

“Our Governor’s admonition was that to check the rising oil theft cases, the Federal Government should involve the oil-bearing communities, where the oil is produced.

“And, to involve them, the surveillance contracts for oil facilities surveillance in the area should be reviewed.

“In otherwords, make them to own it, let them be partners because if you make them part of it, they will guard, police and protect it.

“They will do anything to make sure that they protect it, but if you alienate them from it, they will leave it and allow anything to happen to it,” he said.

He said the state was happy to hear that just a few days after visit, the Federal Government listened to Governor Okowa’s advice and awarded the surveillance contract to Chief Government Ekpemupolo popularly known as Tompolo.

“The thrust here is that a few days after, that injunction by Governor Okowa was adopted by the Federal Government. I am sure that it was through the instrumentality of the delegation that came to Delta.

“We will like to commend them for that because involving host communities is kernel to policing oil facilities and checking oil theft and other vices that occur in the process.

“Across Niger Delta, the government ‘s step was applauded and commended because it is not just for Tompolo but to the host communities.

“The good thing here is that Federal Government heeded good counsel by accepting the advice of our Governor, Senator Ifeanyi Okowa, by giving the surveillance contract to Tompolo.

“So, we are commending the government for listening to the cries of host communities, because if they cannot own the oil blocks, let them, at the least, participate in the ones they can,” he said.
On striking university lecturers in the country, Okowa’s spokesman described the situation as deplorable and called on the Federal Government to come and understudy how Delta Government was managing four universities and enjoying industrial harmony.

He said that the same way Okowa advised Federal Government on oil theft, they should listen to him on education to understand how he and his team were managing four universities, running without strike.

“They should come and learn how Delta is keeping lecturers on campus while lecturers in federal universities have been on strike across the country since February.

“There is industrial harmony in our universities in Delta and all higher institutions in the state are in session.

“If you will recall that after we concessioned the Asaba Airport, the Federal Government sent an aviation team to Delta to find out how the concession was done,” he stated.

On Sheriff Oborevwori’s Appeal Court victory, Ifeajika described it as a family affair and a call for all party members to close ranks and come together and build the party to face the major opposition.