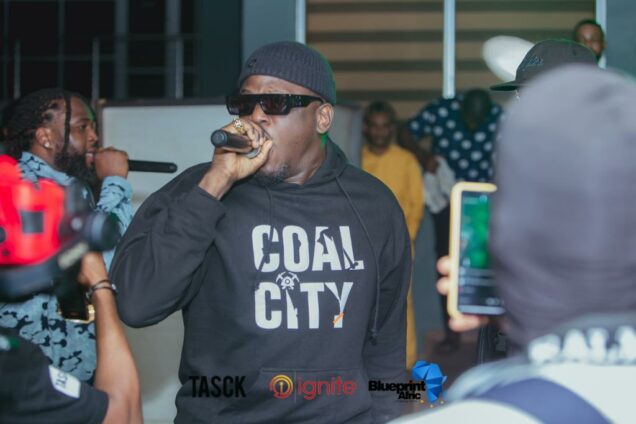 The TASCK Creative in collaboration with BluAfric media hosted a block party in Enugu that encouraged creatives to use their influence to drive social change. With over 500 youths in attendance, it was an immersive experience that included a networking session and a concert headlined by music moguls, M.I Abaga and Illbliss.

The event is a continuation of the ongoing #VoteforNigeria & #iregistered campaign, which is focused on mobilizing young people to vote in the forthcoming elections.

The occasion was kicked off with a networking event at the BlueAfric playground on August 27th, 2022. 21 young creatives were invited to have a conversation with M.I and Illbliss who enlightened them on ways they can strengthen the creative ecosystem by optimizing their platforms for social change.

The rapper, Illbliss who is a native of the state, appealed to the creatives to use their platforms to encourage their audience to be a part of the electoral process.

He said: “Stand up and be a part of the process. That is what TASCK is trying to entrench, that is why we are here.” The rapper added: “We need you guys to tell people that have their PVC’s that their votes count. If we continue to come out in numbers it’s going to be so overwhelming that they can’t shut us down.”

To the creatives delight, Jude ‘M.I’ Abaga, who is also the CEO of TASCK noted that the company is open to collaborations with as many creatives as possible. He also expressed interest in creating content with the creatives to ensure the campaign gains more traction.

“We all have a part to play so let’s work together and use the hashtags #iregistered and #vote4nigeria to get people to the polls.”

The highlight of the Block Party was the #voteforNigeria concert which took place later that day and was attended by over 500 youths. The event had an amazing lineup with over 10 young artists who were given the platform to showcase their talents and usher in the main acts of the night; MI, Illbliss and Ifex.

MI not only thrilled the crowd with hits from his new album “The Guy” but also interrupted his performance with messages to the audience to collect their PVC’s and vote. He consistently emphasized that the goal of the campaign is to increase voter turnout in forthcoming elections.

The #vote4nigeria campaign tour is still ongoing and is set to take place in Jos, Lagos, and Portharcourt. The tour will also be part of the upcoming Incredible Music Festival (IMF) scheduled to occur from September 29th – October 2nd, 2022.

The concerts will also give young artists a platform to promote their music and the opportunity to connect with renowned artists.

TASCK Creative Company Ltd has expressed its commitment to grow the creative sector by connecting young creatives with opportunities to create social change and develop their skills.

To attend the concerts please RSVP here and visit www.thetasck.com for more information.