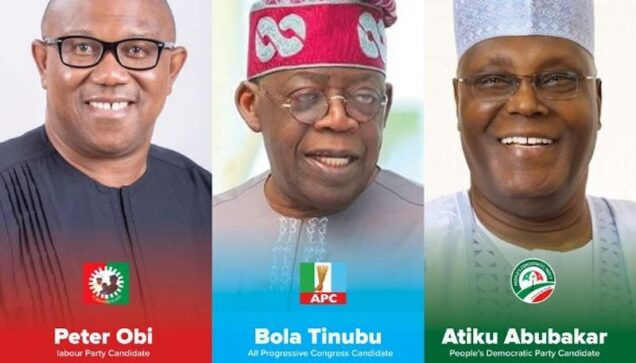 Candidates that will contest for the presidency in Nigeria’s 2023 general elections have set the ball rolling by trying to earn the support of Nigerians by deploying the social and mainstream media.

In their bid to succeed President Muhammadu Buhari, some of the candidates have effectively deployed the social media to earn the support of Nigerians. Thus, they have been successful in building up large followership on various social platforms.

While some people will argue that elections are not won or lost based on sentiments displayed on social media, the number of followership a candidate commands on such platforms can be used to gauge his or her popularity at least among users of the platform.

In other words, a candidate’s popularity on social media is a plus that can be leveraged to shape voters’ perceptions in his or her favour.

This in turn can influence the voters’ decisions on who to vote for at the polls.

Major political parties like the All Progressives Congress (APC), the Peoples Democratic Party (PDP), and Labour Party (LP) have embraced social media to sell their candidates and to debunk misinformation about their parties and their candidates.

Below are the presidential candidates contesting in Nigeria’s 2023 election with the highest number of followers on Instagram and Facebook.

Atiku Abubakar who is the presidential candidate for the Peoples Democratic Party (PDP) in the forthcoming general elections was born on 25 November 1946 in Jada, a village which was then under the administration of the British Cameroons.

The territory later joined with the Federation of Nigeria in the 1961 British Cameroons referendum. His father, Garba Abubakar was a Fulani trader and farmer, and his mother was Aisha Kande.

He served as the vice president of Nigeria from 1999 to 2007 during the presidency of Olusegun Obasanjo. He ran as governor of Adamawa State in 1990, 1997 and later, in 1998, being elected before becoming Olusegun Obasanjo’s running mate during the 1999 presidential election and re-elected in 2003.

He contested the Anambra State Governorship Election as a candidate for the All Progressives Grand Alliance (APGA) party in 2003, but his opponent, Chris Ngige of the People’s Democratic Party, was declared the winner by the Independent National Electoral Commission (INEC).

After nearly three years of litigation, Ngige’s victory was overturned by the Court of Appeal on 15 March, 2006 and he assumed office on 17 March, 2006.

On 2 November, 2006, he was impeached by the state house of assembly after seven months in office and was replaced the next day by Virginia Etiaba, his deputy, making her the first-ever female governor in Nigeria’s history. He later came back after winning the court case.

He became the Labour Party’s candidate for President of Nigeria in the 2023 presidential election after defecting from the PDP. He has 472,593 followers on Facebook and 324,000 followers on Instagram.

Sowore is a human rights activist, pro-democracy campaigner, and Publisher of Sahara Reporters. Sowore is a 2023 Nigerian presidential candidate for the African Action Congress and previously ran in the 2019 election.

Sowore was on 3 August, 2019, arrested by the Nigerian State Security Service (SSS) for alleged treason after calling for a protest tagged “RevolutionNow”.

He was later charged with “conspiracy to commit treason and insulting President Muhammadu Buhari.”

On 24 September, 2019, he was granted bail by the Federal High Court, Abuja, on the condition that he surrendered his international passport within forty-eight hours. The DSS has refused to release Sowore claiming ignorance of the court order.

The DSS’ refusal to release Sowore led to protests at the UN Plaza in New York led by Sowore’s wife which sparked a global decry on Nigeria’s failed democracy.

Bola Tinubu served as the Governor of Lagos State from 1999 to 2007 and Senator for Lagos West during the brief Third Republic.

In June 2022, he emerged as the All Progressives Congress (APC) candidate in the 2023 Nigerian presidential election.

In the first post-transition Lagos State gubernatorial election, Tinubu won by a wide margin as a member of the Alliance for Democracy over the Peoples Democratic Party’s Dapo Sarumi and the All People’s Party’s Nosirudeen Kekere-Ekun.

Four years later, he won re-election to a second term over the PDP’s Funsho Williams by a reduced margin.

His two terms were marked by attempts at modernizing the city of Lagos and his feuds with the PDP-controlled federal government.

After leaving office in 2007, he since played a key role in the formation of the All Progressives Congress in 2013.

Rabiu Kwankwaso was the Governor of Kano state from 1999 to 2003 and from 2011 to 2015 After he lost his re-election in 2003, he was appointed the first Minister of Defence of the Fourth Republic with no prior military background from 2003 to 2007, under the administration of former president Olusegun Obasanjo.

He was later elected to the Senate in 2015, serving one term under the platform of the All Progressives Congress (APC) representing the Kano Central Senatorial District.

In 2011, he was re-elected governor of the state and went on to join the All Progressives Congress (APC) in 2014. In 2015, Kwankwaso unsuccessfully contested the presidential primaries nomination under the opposition All Progressive Congress but lost to Muhammad Buhari.

In 2018, he returned to the Peoples Democratic Party (PDP) and contested the presidential primaries losing out to Atiku Abubakar.

He is currently the national leader of the New Nigeria Peoples Party (NNPP) and has been confirmed as the party’s presidential candidate at the 2023 general elections.