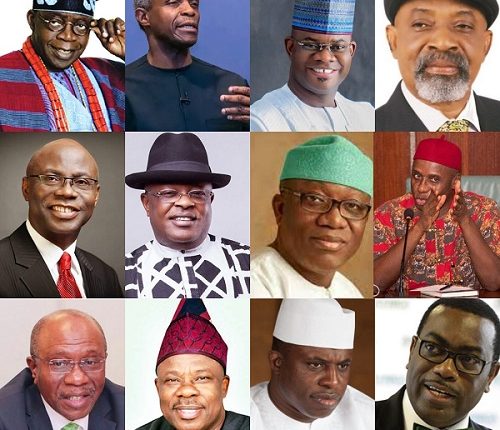 Bola Tinubu, Yemi Osinbajo, Rotimi Amaechi, Ahmed Lawan, and others failed to attend the meeting for all former presidential aspirants of the All Progressives Congress scheduled for Abuja on Wednesday.

Felix said, “We will also brainstorm on adopting winning campaign strategies to support our standard-bearer, Bola Tinubu, and seek to carry every Nigerian along in our bid to coast home to victory in the 2023 general elections.”

However, Felix announced the postponement of the meeting before its commencement after all aspirants failed to show up.

His statement read, “Please be informed that the strategic meeting of 2023 Presidential Aspirants of the All Progressives Congress, scheduled to hold on Wednesday the 31st of August has been postponed.

“A new date for the meeting will be communicated soon. Apologies for any inconvenience(s) that this might cause.”

The aborted meeting sought to address a number of factors such as a conciliatory move to reconcile aggrieved members, challenges bedevilling the country, inclusive politics and adoption of winning campaign strategies to coast home to victory ahead of the 2023 general elections.

However, a source in the Tinubu campaign team, said Felix did not have the mandate to convene the meeting.

“He is on his own. Nobody told him to convene the meeting. He did not carry other aspirants along. The meeting is not a pro-Tinubu meeting,” the source told Punch.

The only female presidential aspirant on the platform of the party, Ohanenye, said she could not attend the meeting because her mother was sick.