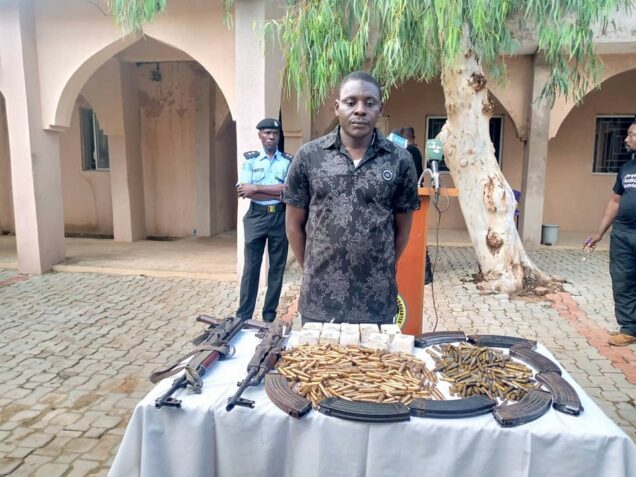 Ex-Army Lance Corporal Sa’idu Lawal with rifles, a cache of ammunition and magazines he was going to deliver in Gusau, Zamfara

A former Lance Corporal in the Nigerian Army, Sa’idu Lawal has been arrested with two rifles, a cache of ammunition and eight empty magazines he was going to deliver to a “customer’’ in Gusau, Zamfara State.

While parading Lawal on Wednesday in Gusau, spokesperson of Zamfara Police Command SP Mohammed Shehu, told newsmen that he is notorious kidnapper, armed robber and a gunrunner.

SP Shehu said Lawal was intercepted in a Pontiac Vibe vehicle with Lagos registration number KRD 686 CY on the Abuja-Kaduna Highway on his way to Zamfara.


Specifically, he listed the items the former soldier was caught with to include one AK-47 rifle, one AK-49 rifle, 200 rounds of 7.6mm live ammunition, 501 rounds of 7.62x51mm ammunition and eight empty magazines were recovered from Lawal.

“He also confessed that he had previously supplied similar consignment to other customers in Kaduna, Katsina, Niger and Kebbi states,’’ Shehu said.

Shehu added that police had opened investigation and efforts were on to arrest Lawal’s accomplices. (NAN)