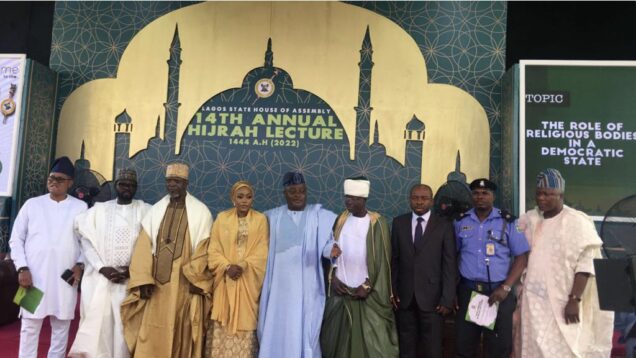 The event which is hosted annually to celebrate the Migration of the Prophet Mohammed and his followers from Mecca to Medina as ordained by Allah was held on Wednesday, 31st August 2022, and was graced by dignitaries including the Speaker Lagos House Of Assembly/Chief Host, Hon. Mudashiru Ajayi Anosede, top Members of the House Of Assembly, Kings and Royal Chiefs, the representative of the commissioner Of police, lead Imams and Sheiks as well as the invited guest speakers of the day.

The opening remark was made by the Hon speaker who welcomed everyone present and declared the event open.

The first speaker, Sheikh Dr. Ishaq Zuglool Sunnusi who is currently the head of academics at Daru Dawah Wal Irshad Arabic center delved into the topic of the day by establishing the fact that Islam advocate for peace, love, tranquility, Justice, and anything contrary is not of Islam.

According to him, Religion is totally different from politics and he gave instances in the history of Nigeria where we had Christian/Christian leadership without any hitch.

Sunnusi encouraged religious leaders to preach the gospel of peace and not propagate religious fights, and also quoted two passages from the Bible Mattew 22vs 39 which says “Love your neighbor as yourself” and Timothy 2vs 24 to buttress his points.

“And the Lord’s servant must not be quarrelsome but must be kind to everyone, able to teach, not resentful” to reiterate the need for love in humanity.

The second Speaker, Hon Justice Abdurraheem Ahmad Sayi, a judge of the Shari’ah court of appeal, Kwara state said the role of religious bodies in a democratic state is not limited to Muslims alone but also to Christians. He mentioned that for every disparity created by Allah there are abundant peculiarities and God has created us equally.

To him, it is against the teachings of Jesus and the Prophet Mohammed to consider some sets of people lesser humans and others Superior.

Hon. Abdur-Raheem further explained that some religious leaders are guilty of manipulating and probably hypnotizing their members and there is certainly no justification for falsification of the message.

He concluded by saying that every Muslim should be adorned with fairness and equity.

He explained that it is the duty of citizens to elect leaders and also the duty of leaders to serve the people. Without filtering his words, he expressed his disappointment in some of those in government and debunked the popular saying that goes thus “Politics is a dirty game”.

According to him, politics is not and should not be regarded as a dirty game.

The chief imam emphasized the importance of love to mankind and how it facilitates cohabitation, and also said that the idea of a Muslim/Muslim ticket is just to create confusion as Politics is politics.

He concluded by praying for all Nigerian leaders to be able to do better in government.