Abuja-Kaduna train: It's time to move on, says MURIC 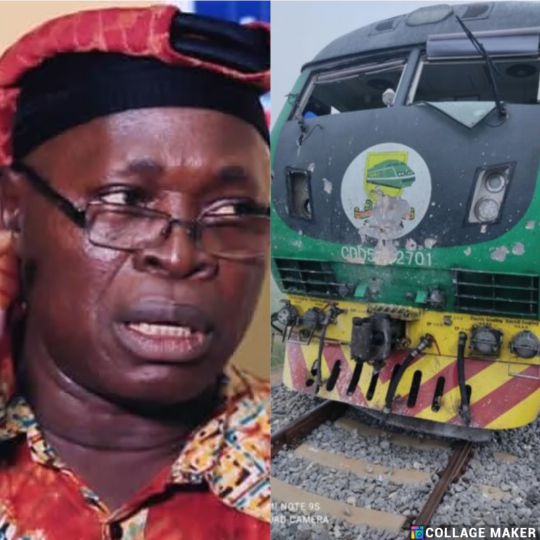 The Muslim Rights Concern (MURIC) has appealed to the families of victims of the train attack on the Abuja-Kaduna rail line to allow the train service to resume.

Prof. Ishaq Akintola, MURIC Director, said this in a statement on Friday in Abuja.

“Bandits attacked the Abuja-Kaduna train on March 28, killing eight, injuring 26 and kidnapping about 300 passengers. The bandits have since been releasing their victims in batches and only 23 remain in captivity.

“Attempts by the Nigerian Railway Corporation to resume operation on the Abuja-Kaduna route was met with stiff resistance as families of abducted victims vowed to disrupt such resumption unless the victims were released.

“MURIC sympathises with families of the victims. We feel their pain. It has been traumatizing for every patriotic Nigerian and they have been praying for the victims. The kidnapped victims are in our thoughts every day.

“But no one should politicise the sad development. It is time to move on. While the Federal Government must continue to work towards the release of the 23 remaining victims, we must allow the railway authorities to resume work because thousands of Nigerians who need the services are being deprived this dividend of democracy on a daily basis. Resumption of work is therefore in the best interest of a greater majority of Nigerians,” Akintola said.

“We must base our actions on the enlightened thought of Jeremy Bentham (1907) who argued that the moral quality of an action must be judged by its consequences on human happiness. He therefore concluded that mankind must aim at the greatest happiness for the greatest number.

“We believe that it is time to apply this principle of governance and morality to the Abuja-Kaduna train attack imbroglio. It has been a very sad and unfortunate incident and we solidarise with the victims and their families. But life must continue particularly in view of the large number of citizens who are suffering the consequences.

“This is where the families of the victims need to do a rethink and allow the resumption of the train services. One major reason for this is that the disruption only serves the interest of the bandits and that of enemies of Nigeria. The decision to disrupt services was made in May 2022. Four months have passed since then and the trains have remained grounded.

“That is an integral part of Nigeria’s infrastructure. If anyone thinks he is depriving President Muhammadu Buhari of the joy of achievement in the area of railway transportation by disrupting train services, such a person is making a big mistake. It was Barrack Obama who said, ‘Hoping your president fails is the same as hoping your country fails, and it is not patriotism. Patriotism is supporting your Commander-in-Chief even if you don’t agree with him on everything.”

“Unfortunately it is another vital part of the anatomy of the North that is bleeding. Transportation facilitates ease of business and Northern economy loses crucial doses every single day that the train disruption continues. The families of the train victims should realise that only a section of the country is suffering as a result of their protestation. Train services continue to run on the Lagos-Ibadan and Itakpe-Warri routes.

“That is selective justice. But how much of this hurts FG? We must put on correct thinking caps and only rational, creative and progressive caps can make any meaning. We need caps that can enable us to think like true and patriotic Nigerians.

“People lose their dear ones every day. Kidnappers strike everywhere on a daily basis. The families of the victims of kidnapping and other attacks have never attempted to stop innocent Nigerians from enjoying the services of either a local or state government on account of such attacks.

“It is only in the case of this Abuja-Kaduna train attack that we find families of the victims turning on the government for a pound of flesh. We are therefore compelled to think there may be more to the train attack than meets the eyes.

“Unfortunately it is other innocent Nigerians who are feeling the impact of their demand. This is why we call on those threatening to disrupt the Abuja-Kaduna train services unless the victims of the attack are released to drop the demand.”

“It is no longer tenable. The threat has lasted too long without achieving the required result. Schools are still open and functioning in Chibok and in Borno in general despite the fact that majority of the Chibok girls are yet to be released.

“Another bitter truth is that those who refuse to allow Abuja-Kaduna trains to resume work are not punishing FG. They are punishing innocent Nigerians. Buhari does not ride this train. Neither does Amaechi. We need to be reasonable sometimes.

“We appeal to well-meaning Nigerians, groups and institutions to speak up on this issue. We must speak the truth to the families or whoever is behind the threat. The Arabs say ‘Silence on abomination is an abomination (As-sukuutu ‘ala al-munkar munkar)’. Malcolm X was thinking along this line when he said, ‘I am for truth, no matter who says it. I am for justice, no matter who it is for or against’.

“Late Ahmadu Bello, the Sardauna of Sokoto, once said, ‘The greatest weapon is truth’. Isn’t it high time we used that weapon to find a solution to the train impasse? Why are we not hearing any appeals targeted at the families of the train attack victims? “Must thousands of innocent Nigerians continue to suffer like this?”

“The continued silence of stakeholders is not the best. It is true that we can speak truth to power. But it is not by power alone. We must be ready to speak the truth to the other party too. That is why Samuel Butler (1835–1902) said, ‘Silence is not always tact, and it is tact that is golden, not silence.”

“Permit us to reiterate that our appeal to families of the victims to allow train services to resume on the Abuja-Kaduna route should not be misinterpreted as asking us to forget the victims.

“FG must continue to seek ways of securing their release while Nigerians should continue praying for the safety of the remaining 23 victims.”