Yusuf Buhari, seven others jailed for fraud in Kaduna 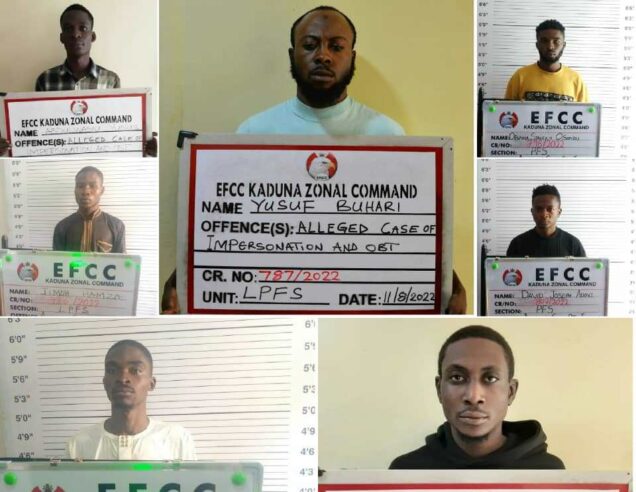 Justice Nasiru .U. Sadiq of the Kaduna State High court has convicted and sentenced eight internet fraudsters to various terms of imprisonment for internet-related offences, cheating and impersonation.

They were jailed on Wednesday, August 31, 2022 after pleading guilty to one-count separate charge bordering on impersonation and cheating, upon their arraignment by the Kaduna Zonal Command of the Economic and Financial Crimes Commission, EFCC.

The one count charge for David Joseph reads: “That you David Joseph Adoyi, on or about the 11th of August, 2022, at Goni Gora axis of Kaduna, within the jurisdiction of this Honourable Court and in such assumed character impersonated one Mark Johnson (an American citizen) via your Instagram account and you thereby committed an offence contrary to and punishable under Section 142(1) of the Kaduna State Penal Code Law, 2017.

The charge for Abdulwasiu Yunus reads: “That you Abdulwasiu Yunus, male, sometimes in April, 2022, in Kaduna, within the jurisdiction of this Honourable Court, impersonated one Alina Belle, a citizen of United States of America on Instagram and in such false identity engaged David Plewis on a romantic relationship and obtained the sum of $5000 USD (Five Thousand United States of America Dollar) worth of gift cards, and you thereby committed cheating by impersonation, an offence contrary to Section 308 of the Penal Code Law, 2017 of Kaduna State and punishable under Section 309 of the same law”.

The defendants pleaded guilty to their respective charges when read to each one of them separately.

Consequent on their guilty pleas, prosecution counsels: Moses Arumemi and Matiyak.Y.John and M. Lawal, prayed the court to convict them accordingly but defence counsels: Abu Usman.A, N.S Dantata, Aba Cornelius Afiyoup, N. Shehu and B.A Tanko, sued for mercy of the court for the defendants, stressing that they had become remorseful.

On the parts of Yunus and Buhari, Justice Sadiq convicted and sentenced them to three months imprisonment each, without an option of fine.

Jerry was also sentenced and convicted to three months imprisonment with an option of fine of N100,000.00 and forfeited two mobile phones to the government.