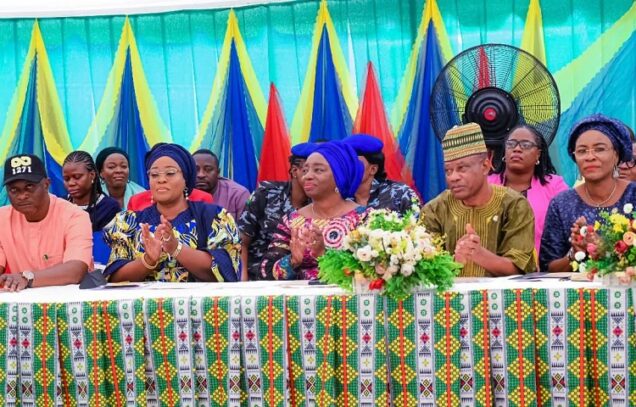 Sanwo-Olu and others at the event

She said such alertness was important to avert attack mishaps.

Sanwo-Olu, who spoke at a one-day seminar organised by the Committee of Wives of Lagos State Officials (COWLSO) on “Market Sanitation, Security and Safety for Market Leaders”, in Surulere division of Lagos State, charged the market stakeholders to join up in the system of intelligence gathering by divulging information of security threats to the appropriate channels.

“We have purposely included the security and safety of our markets as part of the topics at this seminar for obvious reasons that security is everybody’s business, and as market men and women and community leaders, we must be conscious of the need to make our security a priority.

“When we see something, let us not only say something but do something to ensure that a potential security threat is nipped in the bud,” she said.

Sanwo-Olu said there must be proper identification of all traders and people trading in the market, saying that monitoring and evaluation of security activities in the market “must be a daily affair and also in every community.”

She added: “As market men and women, you must take ownership of security in your markets, and you have to speak up and speak out loud and clear when you suspect any suspicious movement or activity around you.”

She further charged them to be sensitive to prevent fire outbreaks in the markets.

This is just as she called on them to instill sanity in markets across Lagos, mentioning such was essential to take the profile of market situations in Lagos beyond the present state to meet international standards.

Sanwo-Olu, who is the Chairperson of COWLSO, said it was essential to reject unhygienic practices in their entirety including “indiscriminate dumping of waste, blocking of drainages, and street trading, among others.”

According to her, the seminar was in furtherance of efforts to ensure that market activities were conducted in a hygienic, safe, and secure environment.

According to her, the sensitisation was held in necessity to ensure that market activities are conducted in line with international best practices, especially as they relate to sanitation, security, and safety.

“The truth is that it is in our collective interest to imbibe international best practices in administering markets and our environment,” she said.

She added that empirical evidence had shown that there is a nexus between the state of an environment and the health of residents in such an environment.

“Garbage in, Garbage out; it is the way you treat your environment that it responds to you. This is why hygiene in the market becomes extremely important as all residents are connected one way or the other.

“We know that a lot of waste is generated from our markets and as market leaders, it is important that we must reject unhygienic practices in their entirety including indiscriminate dumping of waste, blocking of drainages, and street trading, among others.

“The issue of hygiene and cleanliness in our markets is paramount, and every important and necessary step must be taken by all stakeholders to inspire a healthy and secure marketplace,” she said.

Special Adviser to Governor on Local Government and Community Affairs, Bolaji Kayode Robert, said organising such programme consistently over the years was a proof that with concerted efforts, making Lagos State a 21st Century Economy was possible.

He said the seminar addressed the fibre of the state of security and sanity of markets in Lagos State.

Robert said much vigilance and attention must be paid even to the tiniest detail in the markets, so as to guarantee safety of lives and properties.

He added that there was no doubt that security and sanitation remained vital issues in the society, especially in the markets, saying that it was essential to spread the message across other nooks and crannies of the State.

“Let me also inform us, that, Lagos State under the leadership of Mr Governor has been at the top of the security situation in the State, hence the ease of business and the developmental projects we are experiencing in the State,” he stated.

Commending the organisers of the programme, he assured continuity of efforts to enhance “the advocacy and sensitisation on Market Sanitation and Security for Market Leaders.”

He urged the stakeholders to maximise the opportunity to learn better ways on market sanitation and security that the seminar afforded.

The State’s Commissioner for Environment and Water Resources, Mr Tunji Bello, represented by Dr. Hassan Sanu, said with the space limitation of the State in face of teeming population, it was important for market stakeholders to conduct themselves responsibly, with conscious efforts to management of market sites.