Lawan donates N200m as Yobe names ultra-modern market after him 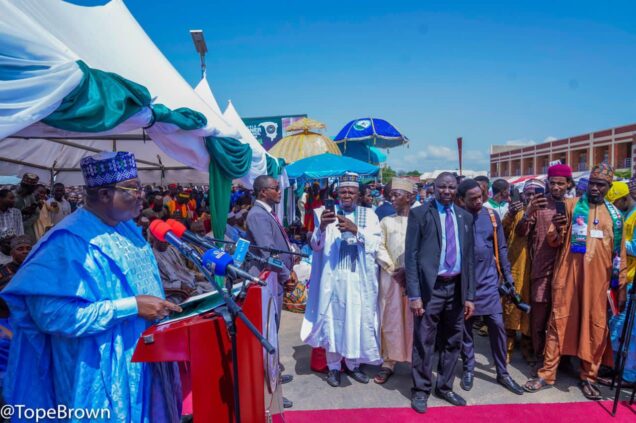 Lawan donates N200m as Yobe names ultra-modern market after him

The Yobe State Government has named the Gashua Ultra-Modern Market after the Senate President, Ahmad Lawan.

The announcement was made at the commissioning of the project by the State Governor, Mai Mala Buni, Saturday.

He said, “I have the pleasure to announce to you that the Gashau modern market has been named after Distinguished Senator Ahmad Ibrahim Lawan.

“The first ever President of the Senate from Yobe State and, indeed, the entire North East geo-political zone; and in recognition of his invaluable contributions to the state, and as well the exemplary working relationship he established between the executive and legislative arms of government for a developmental democracy to thrive.”

“The market is expected to stimulate increased economic activities that will enhance job opportunities and income generation for our people and and promote internally generated revenues.”

He said that the market was registered as a limited liability company with a full-fledged board of directors to be supported by management staff.

He, therefore, enjoined the board and management of the market to work to ensure good utilisation of all facilities towards the realisation of collective goals.

The Senate President, who commissioned the project, announced, on behalf of his SAIL Foundation, a donation of N200 million to traders in Bade Local Government through his foundation.

He announced that the Foundation, under his leadership, will oversee the disbursement of the funds to local traders.

Speaking immediately after the announcement by the Governor naming the market after him, Lawan said, “Your Excellency, I’m short of words today, for this honour done to me today.

“Your Excellency, Yobe State is out on the trajectory of development.

“Today, we are celebrating one of those development strides you have brought to our state.

“In particular, the ultra-modern markets in the four local governments are signs of efforts by your administration to create employment opportunities, generate wealth and, of course, ensure sustainable economic development for our state.

“Your Excellency, I want to assure you that those of us representing Yobe State in the National Assembly will continue to give our maximum support to you and our administration in this state, and nothing less is expected of us.

“I am particularly thrilled when you mentioned that the ultra-modern markets of Gashua and Nguru have been completed.

“On behalf of all of us in Zone C, otherwise known as Yobe North Senatorial District, I want to thank you for this care and concern for the development of this zone.”