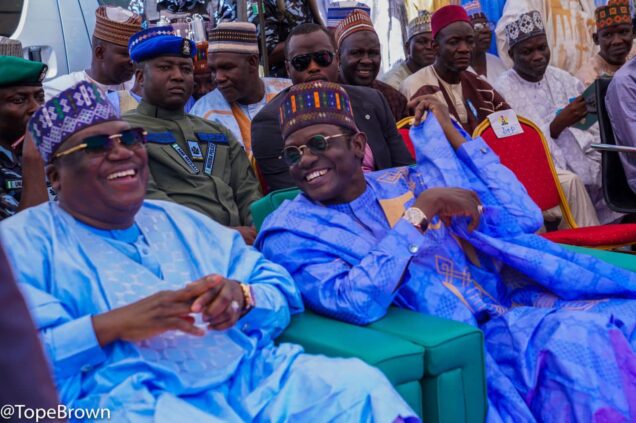 Yobe State Governor, Mai Mala Buni, has described the Senate President, Ahmad Lawan, as a national figure who has contributed immensely to the nation’s unity.

Buni stated this when he delivered a speech at a grand reception organised by the Yobe State Government in Gashua, Bade Local Government Area, on Saturday.

He said that Lawan’s sterling accomplishments and passion for an indivisible Nigeria set him aside for the honour by the state government.

Buni said, “His Excellency, Sen. Ahmad Ibrahim Lawan, the President of the Senate, though elected from Yobe state, has become a national figure and this explains why he is honoured with numerous traditional titles from across the country.

“These recognitions by the various groups, indeed, justify why he should now be honoured at home to appreciate him and his contributions to national unity, the development of his constituency, Yobe state, the North East sub-region, and the nation.

“His Excellency, Distinguished Senator Ahmad Ibrahim Lawan, is an apostle of a united Nigeria. His passion for an indivisible Nigeria is uncommon and second to none. Little wonder why he always maintains the slogan ‘Unity’.

“Your Excellencies, distinguished invited Guests, ladies, and gentlemen, it is imperative for us as a society to always appreciate and celebrate those who have improved the lives of our people.

“I believe that such recognition will spur them to do more to add value to the lives of Nigerians and humanity generally.

“It is with utmost gratitude that the Senate President ensured that Yobe state is never shortchanged having missed out for 16 long years under the PDP administration.

“Among some of his numerous contributions to Yobe state, the Northeast Sub-region, and Nigeria, are his pivotal roles in the approval of the new railway line from PortHarcourt to Maiduguri via Damaturu and Gashua, the Damaturu Regional Water Supply, the reconstruction of Wachakal Airport, the Fika Water Project, the upgrading of 132 KVA power line, the ongoing upgrade of Geidam, Gashua and Nguru power substations.

“This is in addition to the numerous roads, electrification, and medical facilities that he secured to the state, as well as, Federal Government appointments he also secured for many people, and many others too numerous to mention.

“Your Excellencies, distinguished invited guests, ladies and gentlemen, we cannot forget in a haste the great role of the eloquent Senate President in the birth of the North East Development Commission from a bill to law and now a full-fledged commission that is addressing the unfortunate circumstances that, we in the Northeast, found ourselves following the over a decade-long Boko Haram insurgency.

“For the avoidance of doubt, let me place it on record that my office and the office of the President of the Senate, have been working closely with a committed zeal to attract more federal presence to support our efforts at the state level to collectively move Yobe state forward.

“Today, the North East Development Commission is seen actively investing resources in the Resettlement, Reconstruction, and Recovery process in the North Eastern states.

“At this juncture, let me specially recognize and appreciate the lawmakers who supported the President of the Senate to make the North East Development Commission and other projects become reality.

“Some of you are here with us today to show your love and share this good moment as we celebrate this brilliant icon, Yobe state is blessed with. We sincerely appreciate you.”

In his response, Senate President Ahmad Lawan said, “I am very happy that my people have decided to honour me. Yobe north, this is your reception, you made it possible.

“If you didn’t elect me in 2019, I wouldn’t have been Senate President. I appreciate the support over these years, and I want to promise you, that so long as we remains engaged with the federal government, we will have the best of treatment.”