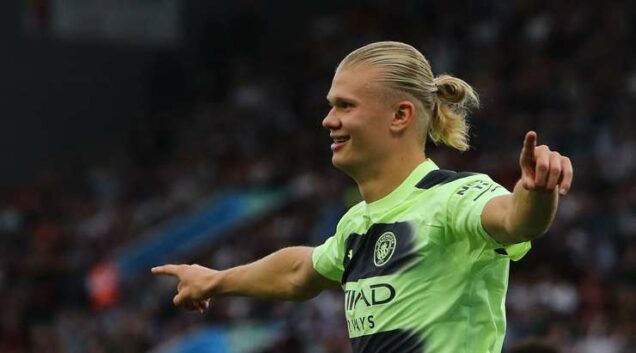 Manchester City failed to climb top on English Premier League table on Saturday after a 1-1 frustrating draw at Aston Villa.

City needed to win the match to move top ahead of Arsenal pending the outcome of the Gunners’ game against Manchester United on Sunday.

With the draw, the Citizens are still second on the table with 14 points. Arsenal will still be on top even if they lose their match against United on Sunday.

The first half was goalless until Erling Haaland gave City the lead on 50 minutes, scoring his 10th goal of the season in just six games.

Kevin De Bruyne played the ball into the box, and Haaland got on the end of the cross to put it into the back of the net.

On 64th minute, Emiliano Martinez made a sensational save to thwart a great chance. A rebound fell to Haaland on the edge of the box and he drilled goalwards, but the ball ended up in the keeper’s gloves instead of the middle of the goal.

Two minutes later, De Bruyne unleashed a brilliant effort from the free kick, but the ball crashed against the bar.
Villa equalised on 74th minute. Leon Bailey received a great pass from his teammate and struck a very powerful shot towards goal that went inside of the right post.
Tags:   Aston Villa   Manchester City