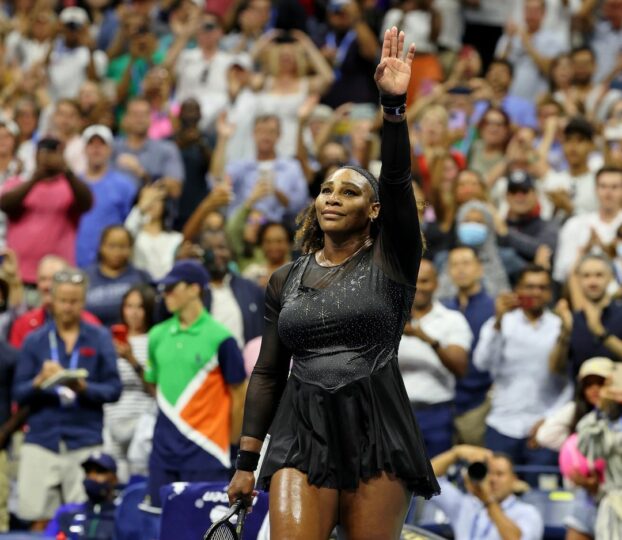 Michelle Obama, the former first lady of the United State, led the tributes to tennis legend Serena Williams after she brought the curtain down on her illustrious career Friday night.

All good things must come to an end, and for Williams, the end – or what seems like the end – of one of the greatest athletic careers in history came calling in Flushing Meadows on Friday night.

A host of A-list celebrities filled the Arthur Ashe stands but the celebrities not only flooded to Flushing Meadows to show their support of the tennis great but many also took to social media to pay tribute.

From legends like Tiger Woods and Derek Jeter, to fellow tennis players such as Ons Jabeur and Carlos Alcaraz to NBA and WNBA stars like Breanna Stewart, JR Smith, Isaiah Thomas, and Diamond DeShields, Williams drew the admiration and attention of all.

Michelle Obama posted a video of Williams interacting with the Arthur Ash crowd following her defeat.

The former FLOTUS wrote: ‘Congrats on an amazing career, @serenawilliams! How lucky were we to be able to watch a young girl from Compton grow up to become one of the greatest athletes of all time? I’m proud of you, my friend—and I can’t wait to see the lives you continue to transform with your talents.’

Woods, who had also tweeted following her victory on Wednesday to claim it was a ‘privilege to watch greatness’, posted: ‘You’re literally the greatest on and off the court. Thank you for inspiring all of us to pursue our dreams. I love you little sis!!!!!!’

Tennis icon Billie Jean King tweeted, ‘Her incredible career made its mark on tennis history. And yet her greatest contributions my be yet to come. Thank you, @serenawilliams. Your journey continues.’

After her own match on Friday afternoon, American tennis starlet Coco Gauff had said she hoped Williams would emerge victorious from her third-round showdown so that she could play the great later in the tournament before her potential retirement.

Gauff’s victory preceded Williams’ third round on Arthur Ashe and she gushed about the GOAT’s US Open journey following her match.

‘It’s been amazing, I ordered room service just so I can watch it by myself,’ she added of watching one of her idols. ‘I know she’s on my side of the draw but I don’t know when but that’s the goal. It’s a lifelong dream of mine.’

While Gauff will now not have her wish granted, she still took to Twitter to thank the GOAT. The 18-year-old wrote: ‘Serena, THANK YOU. It is because of you I believe in this dream. The impact you’ve had on me goes beyond any words that can be put together and for that I say thank you, thank you, thank you, GOAT!’

Lakers superstar LeBron James also bowed down to the queen of Queens in a video posted to Twitter.

‘Wow, where do I start. First of all, I can start by just saying congratulations to you, to an unbelievable career. You’re a GOAT,’ LeBron said in a heartfelt tribute to Williams.