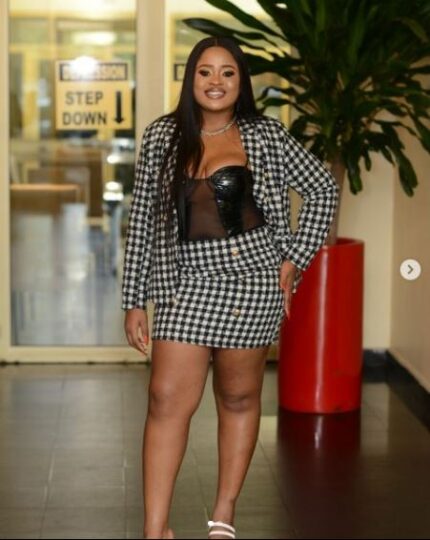 Amaka, popularly referred to as ‘Maki Billions’ could not contain her excitement as she received money cake from fans.

The reality star was kicked out of the house on Aug. 29 after Biggie introduced a twist in the game.

Fortunately for Amaka, her newfound fame seems to be treating her quite well as she shows off the massive cake she got.

She was seen dancing happily beside her pyramid-shaped money cake despite the fact she never got to the final stage of the show, losing out on the huge grand prize.

Amaka during a zoom interview session with newsmen in Lagos said that aside being more focused, the show also taught her a few morals.

“The Big Brother Naija show has been a springboard to sell my brand, I met different people and the show has taught me to be more focused in life.

“l learnt a lot on the show, it has made me realise that I am me and I am in the best position to modify myself, I need to stand up for myself at all time and I learnt that women are strong beings.

“My eviction was also a sad one for me but I am trying to live on the energy I am getting from my fans. I had pure love for the housemates but it is what it is.

“I already knew I was going to be nominated but didn’t see the eviction coming,” she said.