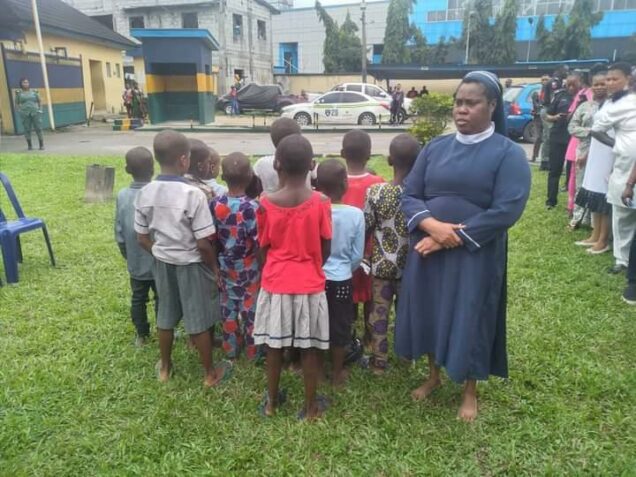 Rev. Sister Wechinwu with the children rescued from her orphanage in Aluu community of Rivers State by the police

Operatives of the Rivers Police Command have rescued 15 children from a suspected fake orphanage being operated by one Rev. Sister, Maureen Wechinwu in Aluu community, Ikwerre Local Government Area of of the State.

Rivers Commissioner of Police, Eboka Friday, told journalists on Tuesday in Port Harcourt that on 3rd September 2022, operatives of the Command, acting on credible information about the hideout of child traffickers, stormed Omuigwe Abuja Phase II, Aluu, in Ikwerre Local Government Area, where a lady who claimed to be Rev. Sister, Maureen Wechinwu, aged 44 years who run the orphanage was arrested.

CP Eboka disclosed that 15 children rescued was from the orphanage were transferred to CP Monitoring Unit for discrete investigation.

According to the Police boss, one of the children identified as Master Prosper revealed that he was abducted at Kpanzia market in Bayelsa State on October 31, 2020 alongside two others.

He, however, said he did not know the whereabouts of the two other children as they were taken away by the suspects.

CP Eboka said the child further stated that he was initially sold to a woman at Lagos, but later returned back to the Orphanage.

He added that the parents of Prosper, Mr. and Mrs. Godwin Ododor have been contacted and they corroborated the statement of the child.

However, Rev.Sister Wechinwu told journalists that her Orphanage is genuine.

She claimed that five of the children were recovered from mentally challenged women while the others were brought to her by one Victor.

She however said she did not know where the said Victor brought the children from.

The Bolt Driver is said to specialize in robbing his passengers at gun point.

The suspect, in an interview with journalists, admitted to the crime. Exhibits recovered from the suspect include: One Infinix Phone 681 and one Toyota Matrix Blue in color with Reg. No PHC 577 ALA.

Another set of a gang of three suspected armed robbers were also paraded by the Commissioner. The suspects were nabbed, according to CP Eboka, followed arrest of one Sadiq David who was in possession of one locally made double barrel pistol, with three live cartridges on 3rd July 2022, by the operatives of Elelenwo Division of the state police command.

The suspect was was transferred to C4i Intelligent Unit for discrete investigation. The investigation led to the arrest of one Hamisu Hassam, 30 years, and Babangida Ibrahim aged 26years at Yam Zone, in Oyigbo Local Government Area of Rivers.

CP Eboka said a total of 21 suspects were arrested will soon be charged to Court while six live cartridges 9 vehicles,3 motorcycle, one mobile phone were recovered.

CP Eboka appreciated the people of the state for cooperating with the Police by providing credible information .

He said “all the recorded achievements wouldn’t have been possible without your timely information, most of which are through phone calls”.