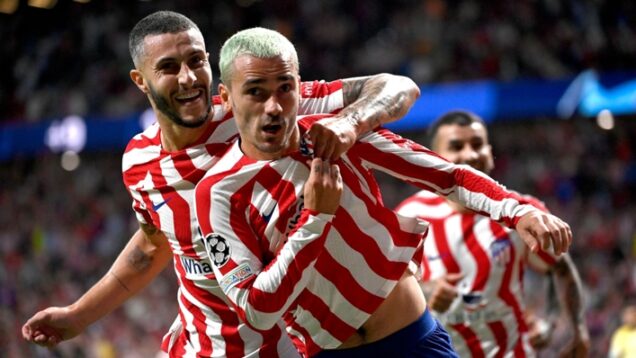 Antoine Griezmann stepped off the bench to guide Atletico Madrid to a remarkable 2-1 win over 10-man Porto in the Champions League, in a match that featured three stoppage-time goals.

Atleti and Porto played out a goalless draw when they met on the opening matchday of last season’s Champions League, and a repeat looked likely for the duration of normal time on Wednesday.

But after Mehdi Taremi picked up a second yellow card for simulation, Mario Hermoso fired Atleti ahead before handling in his own area, allowing Mateus Uribe to level the scores with a 96th-minute penalty.

There was to be one final twist in the 11th minute of added time, however, as Griezmann reacted quickest from an Atleti corner to cap a remarkable contest with a dramatic winner.

Both sides struggled to create chances during a low-key opening half, with Evanilson working Jan Oblak from a tight angle before Taremi was left fuming by his team-mates’ failure to meet his inch-perfect cut-back.

Atleti did have the ball in the net five minutes after the break, but Koke’s side-footed finish was ruled out after Rodrigo De Paul strayed offside, before Oblak made strong saves from Stephen Eustaquio and Joao Mario.

Porto were put on the back foot when Taremi’s dive earnt him a second yellow card eight minutes from time, and they paid the price when Hermoso struck with a deflected effort in the first minute of stoppage time.

But Hermoso quickly went from hero to villain, handling in his own area to allow Uribe to slot a late penalty beyond Oblak, seemingly earning Porto a share of the spoils.

Griezmann, however, was determined to have the final say, and peeled away to nod Axel Witsel’s flick-on home with the final touch of the game, sparking wild scenes in the Spanish capital.

What does it mean? Atleti end poor run in remarkable fashion

Wednesday’s incredible finale was just the second time in Champions League history that a match has seen three goals scored in the 90th minute or later (excluding extra-time), with the previous instance being a meeting between the same two sides in Portugal last December.

The end result is that Atleti have ended an eight-match winless run at home in the competition, which was the longest ever recorded by a Spanish club.

Griezmann was directly involved in 67 per cent of Atleti’s goals in last season’s Champions League (6/9), scoring four and assisting two. His minutes may be being managed by Diego Simeone this campaign, but the 2018 World Cup winner is still capable of a crucial intervention.

Scored after 100 minutes and 21 seconds, his winner is the latest goal (excluding extra-time) on record in the Champions League (since 2003-04).

Porto’s tally of 17 shots was their highest on the road in this competition since October 2016, and they appeared the more likely victors before Taremi left them at a numerical disadvantage.

There have now been a remarkable four red cards in the last three Champions League meetings between these teams, three of them for Porto. Meanwhile, only fixtures between Juventus and Real Madrid (eight) have seen more dismissals than Porto v Atletico (five) in Champions League history.

Atleti host Celta Vigo in LaLiga on Saturday, while Porto face Chaves in their next Primeira Liga outing on the same day.