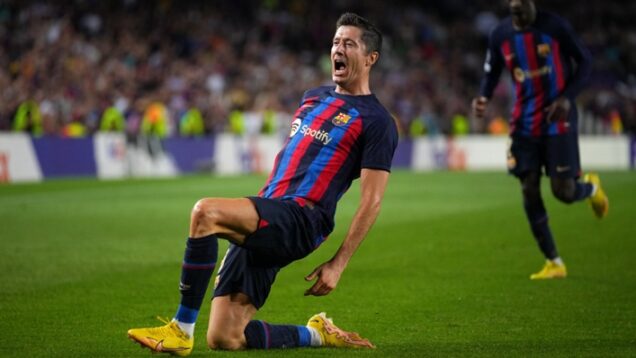 Robert Lewandowski made history with his maiden hat-trick for Barcelona against Viktoria Plzen, becoming the first player to hit Champions League trebles for three different sides.

The Poland international found the target twice in the first half at Camp Nou on Wednesday, with Franck Kessie and Plzen’s Jan Sykora also netting in a frantic opening 45 minutes.

Lewandowski capped a scintillating performance with his third after 67 minutes, firing a 20-yard finish past Jindrich Stanek after a neat interchange with Ferran Torres, who then struck to seal a 5-1 victory for Barca.

The latter strike for Lewandowski made him the first player to ever score Champions League hat-tricks for three different teams, having previously hit trebles for Bayern Munich (four) and Borussia Dortmund (one).

Lewandowski was level on Champions League goals with Karim Benzema (86) heading into the game but moved to third in the all-time scoring charts – only Lionel Messi (125) and Cristiano Ronaldo (140) have more.

The Barca forward has been in fine LaLiga form as well, scoring five times in four league appearances, and will look to continue his scoring run when the Blaugrana visit Cadiz on Saturday.