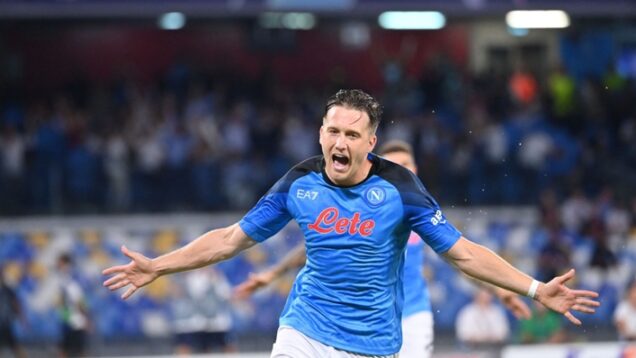 Piotr Zielinski celebrates after scoring for Napoli against Liverpool

Piotr Zielinski struck twice and assisted another as Liverpool’s poor start to the season continued with a humbling 4-1 defeat at Napoli in their Champions League opener.

Jurgen Klopp’s side have underwhelmed in their first six Premier League games, winning just twice, and were behind after only five minutes in Naples following Zielinski’s penalty.

Alisson denied Victor Osimhen’s spot-kick just 13 minutes later, but Napoli were 3-0 up at half-time after strikes from Andre-Frank Zambo Anguissa and Giovanni Simeone, the latter on his Champions League debut.

Zielinski finished past Alisson again after the interval before Luiz Diaz responded with a bending effort – a mere consolation goal for Liverpool in the Group A encounter.

Osimhen rounded Alisson before striking the post with just a minute played, but Napoli were soon ahead after James Milner handled Zielinski’s effort inside the area.

Zielinski found the bottom-left corner from the resulting penalty and another spot-kick arrived soon after when VAR sent referee Carlos del Cerro Grande to check a Virgil van Dijk foul on Osimhen, who was then denied by Alisson diving to his right.

Van Dijk cleared off the line with the goal gaping for Khvicha Kvaratskhelia but Napoli doubled their lead when Zielinski teed up Anguissa, who fired under the onrushing Alisson.

Alex Meret tipped away a goal-bound Van Dijk header before Simeone, on for the injured Osimhen, turned Kvaratskhelia’s driven cross into an empty net on the stroke of half-time.

Zielinski doubled his account just two minutes after the break, dinking over Alisson on the rebound following Simeone’s pass, before Diaz curled into the bottom-right corner after Andy Robertson’s offload.

Meret pushed a powerful Diaz header over from Trent Alexander-Arnold’s cross but Liverpool were unable to recover after a toothless first-half showing.

What does it mean? Liverpool’s group-stage run ends as Napoli struggles continue

Liverpool cruised to six wins from as many group-stage games in last year’s competition but their attempts to become the first English side to win seven straight such matches ended abruptly.

The Reds have conceded the first goal in five games in all competitions this season, the joint-most of any Premier League side, and were never going to recover after finding themselves three down at half-time in the Champions League for just a fourth time.

Liverpool’s third Champions League defeat at Napoli in the last five seasons leaves Group A wide open after the first matchday, in which Ajax smashed Rangers 4-0 in Wednesday’s other game.

Klopp heaped praise on Luciano Spalletti’s “interesting project” before the clash and pinpointed Zielinski as the main threat – and the midfielder responded with two goals and an assist.

But Kvaratskhelia should also take the plaudits after regularly tormenting Alexander-Arnold, creating a team-high three chances – one of those the assist for Simeone’s goal – before his 57th-minute removal.

Van Dijk epitomises Klopp’s revolution at Liverpool, with his calmness and authority in defence characterising the dominant Reds, but his performances have left much to be desired in recent weeks.

The center-back fouled Osimhen for the second spot-kick, the second penalty he has conceded in his last seven appearances for the Reds. He had previously not given one away in 150 games in all competitions.

Liverpool will aim to recover when they return to Premier League action at home to Wolves on Saturday, while Napoli host Spezia in Serie A on the same day.