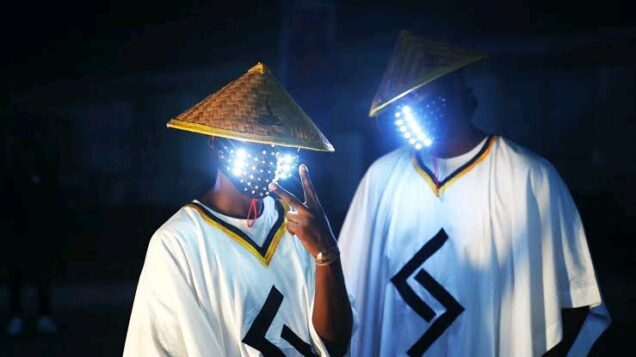 EDM Duo MazexMxtreme, performed at the 7th Big Brother Naija Party held on Saturday, 4th September 2022. The mask-wearing DJs thrilled the housemates and viewers of the show with the most unique performance of the season (so far).

The duo is known for using EDM to push the boundaries of the Afrobeats soundscape – a market that was largely underground.

Curiously, the DJs fused contemporary beats with solid EDM numbers like Avicii’s ‘The Nights’ and other pop numbers, convincing housemates and the rest of the country to pay a little more attention. Before long, the duo had “this DJs” trending on Twitter as a corollary to their breathtaking performance. It was an unforgettable experience.

The DJs held the party down for over an hour, rendering an energetic performance to the excitement of housemates who committed to wrecking the dance floor and doing damage to the party’s bar.

These DJs are fcuking good. The flawless transition and addition of electronic sounds is insane 🔥🔥🔥 #BBNaija

Appreciation tweet for The DJ @mazexmxtreme tonight, these guys were on fire 🔥🔥🔥#BBNxPepsiParty #BBNaija pic.twitter.com/pNbJiuekRW

Omo, they gats bring this DJ again for another night, this Amapiano transition >>>

Stay ready so you don’t have to start getting ready when the big stages comes calling. That’s what Maze and Mxtreme have done. They’ll be fully booked for December. Internationally too. I can’t wait for the stupid parties they’ll be playing across Africa

‘Maze’ also known as Joshua and ‘Mxtreme’ also known as Godfrey are talented young DJs from Benin City, Edo state, Nigeria. Their live act is a well-put-together combo of disc jokeying, live synth and the showmanship to impress a crowd of EDM enthusiasts at the biggest festivals in Ibiza.

Their primary genre is Afro EDM (Afro Electronic Dance Music), which fuses Afrobeats with elements of EDM synth and sound, while their secondary genres include Dancehall Indie, Future Bass, EDM, and House.

The duo hosts their flagship event the Zodiac Party at various locations around Lagos. Its most recent installation was hosted at Nexthought Studios, Lekki, where they thrilled fans with impressive transitions and carefully-curated music. They have also produced the themed soundtrack for Fast Lane Motorsport – the leading Motorsport racing team in Nigeria.

You can stream their performance here or watch below;