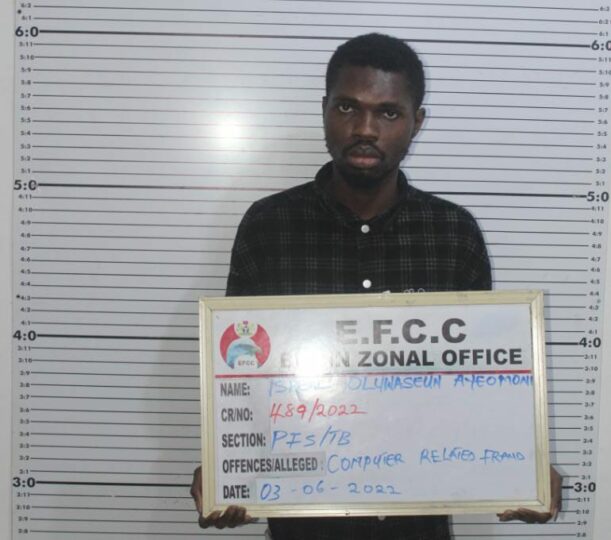 Duru and Ayoomoni were convicted after pleading guilty to one-count separate charge bordering on retention of proceeds of criminal conduct and possession of documents containing false pretense.

They both pleaded guilty upon their arraignment by the Benin Zonal Command of the Economic and Financial Crimes Commission, EFCC.

The lone-count charge against Duru reads: “that you Nnamdi Theo-Joseph Duru sometimes between 1st January, 2017 to November 2021 in Edo State within the jurisdiction of this honourable court did retain the aggregate sum of N8,000,432,22 in your Access Bank Account Number:0090793423 knowing that same represent proceeds of your criminal conduct to wit’ Cybercrime and thereby committed an offence contrary to Section 17(a) of the Economic and Financial Crimes Commission ( Establishment ) Act 2004 and punishable under Section ßdź17(b) of the same Act”

The defendants pleaded guilty to the charge when it was read to them.

Based on their pleas, prosecution counsel, K.Y. Bello, prayed the court to convict and sentence them accordingly.

However, counsel to the defendants, Pascal Ugbome and Osaro Uyi prayed the court to temper justice with mercy as the defendants had shown remorse for their actions.

The judge also ordered Duru to forfeit the sum of $34,000 ( Thirty Four Thousand United States Dollars), recovered from him in the course of the investigation to the Federal Bureau of Investigation as restitution to the victim while Ayoomoni also forfeited the sum of N23,742.36( Twenty Three Thousand, Seven Hundred and Forty-Two Naira, Thirty-Six kobo) in his Guaranty Bank account and the sum of N20,022.10( Twenty Thousand, Twenty-Two Naira, Ten Kobo) in his Polaris Bank account and the sum of 25 USD( Twenty Five United States Dollars) which were recovered from him as proceeds of crime to the Federal Government of Nigeria. He also forfeited his phone to the government while the bank accounts are closed.

The convicts started their journey to the Correctional Centre when they were arrested by operatives of the Benin Zonal Command of the EFCC, for internet-related offences.