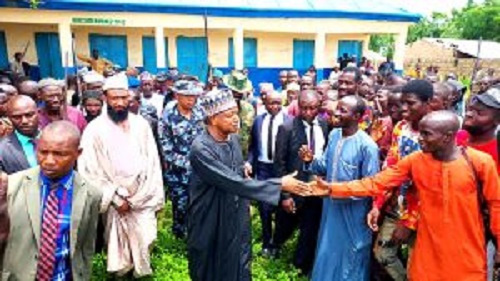 Kebbi Governor, Atiku Bagudu during a sympathy visit to Zuggu in Maiyama Local Government Area on recent confrontation with bandit in the community.

Gov. Atiku Bagudu of Kebbi has hailed the bravery of Zuggu residents in Maiyama Local Government Area, for routing some bandits who attacked the community.

This is contained in a statement issued on Saturday in Birnin Kebbi by Bagudu’s Special Adviser on Media, Malam Yahaya Sarki.

The governor who visited the community on Friday commended residents for standing up to the bandits and defending themselves.

He said that their courageous response to the attack by the bandits was worthy of commendation and emulation by others.

Bagudu said that even though some members of the community had sadly lost their lives, the fact that they routed the bandits and killed some of them was heartwarming.

He urged them and other communities in the state to remain courageous and resilient in ensuring peace and security in their area.

The governor said those who lost their lives in defending the community did not die in vain but died as martyrs.

“We are here to sympathize with you over the unfortunate incident and also to commend your extraordinary effort of defending yourselves.

“People of Zuggu, I commend you for displaying courage to defend yourselves,” he added.

Bagudu said there has been a spill into the state of bandits displaced by the recent military onslaught in neighboring states.

He warned that government would deal decisively with those spreading false information capable of scaring people away from their homes.

“We should be our brothers’ keepers in periods of despair, not to pass false information that could instill fear,” he added.

He commended security agents for their efforts in sustaining peace across the state.

Special prayers were offered for the repose of those who lost their lives during the attack.

The village head of Zuggu, Alhaji Hamisu Magaji, appreciated the governor for the visit and provision of relief materials to the community.

Meanwhile, Bagudu was also at Yar Besse village in Shanga Local Government Area, to assess the level of damage caused by flooding.

He sympathized with those who lost their farms and houses and urged them to regard the disaster as destined by God.

He said that the government would offer more assistance to the victims and prayed to Allah to guard against a recurrence of the disaster.

Responding, the District Head of Shanga, Alhaji Nasiru Jafaru expressed gratitude to the governor for the visit.

Also, the Vice Chairman of the local government, Alhaji Adamu Ladan thanked the governor for his compassion and provision of relief materials to the victims.