Fayose: Why there is 'tension' between Atiku and Wike 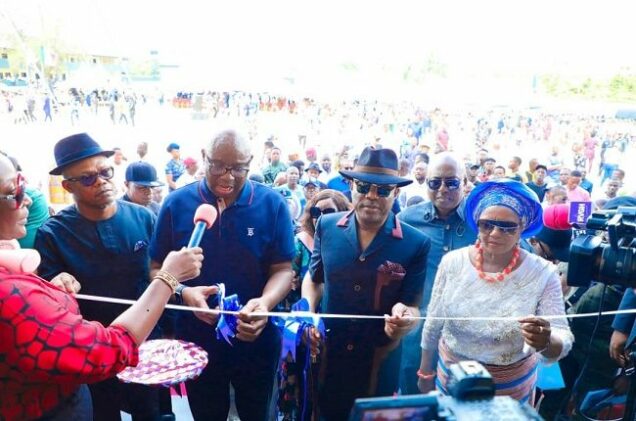 Former Governor of Ekiti State, Ayodele Fayose has blamed a lot of people around Atiku Abubakar, the presidential candidate of Peoples Democratic Party, PDP for creating the tension between him and Rivers Governor, Nyesom Wike.

The former governor who commended the Rivers State Governor for doing so much in provision of quality infrastructure that has raised the quality of living of Rivers people also also spoke of the current crisis in the PDP.

He added that most people think that they must destroy their leaders before they can rise, which is hardly possible.

“For me, I want to believe that His Excellency Atiku Abubakar is not against you. But let me say this quickly, a lot of people surrounding the throne are enemies of the throne.

“A lot of people surrounding the throne has one axe to grind with somebody, or some issues with somebody, and they take it to where they’re not supposed to take it.”

Former governor Fayose reiterated the need for Alhaji Atiku to work to unify the party so that everybody can focus on how to win the 2023 presidential election.

Fayose noted that it is impossible to wish governor Wike away and anybody doing so is the real enemy of the party.

“There is no living person in the party and outside this party that will not acknowledge your contribution to this party. You are the soul of this party.

“Rivers State has been here for long but today we can see the difference. The average Rivers man is proud to be from Rivers. They’re proud to say you’re their governor.

“Forget whatever anybody says about you, I’ve said it before, Wike, the man with a fierce look but a good heart. The heart of love, to accomplish and give support.

He further urged those close to the Presidential candidate to desist from creating disaffection and allow him to unify the party as the 2023 general elections draw near.

“Wike has not come out to say that Atiku Abubakar is not the Presidential candidate. He is. I was there the second day after the election when our candidate, the former Vice President visited the residence of governor Wike.

“We had mutual conversation. We were all happy. Everything was in place to move forward. I spoke at that meeting. But don’t want to aggravate this situation. I’m only appealing to people that matters.

“In every political party there will be grouping. The same family, but different interest. We can do better than we are doing. People around the corridor of power, please allow this candidate to win election. We don’t celebrate victory until it is ours.”

On his part,Rivers State governor, Nyesom Ezenwo Wike has explained the rationale behind the implementation of an inclusive development agenda for the State.

He said, while most people hardly see beyond the delivery of roads projects executed by his administration, it is because the roads are more visible and will lure investors to the State.

“But when you have good network of roads, such will encourage people who want to invest in the State to do so.”

Wike stressed that his administration has also given sufficient development attention to improving structure, teaching and learning facility in the education sector.

“All through this week, we have been busy trying to, and letting the people understand what we are doing in the education sector.

“By the time we finish, we will also go to the health sector and let the state see what we have done in that sector.

“So, for me, it is touching all-round the sectors because no one sector can be said to be more important than the other.”

Governor Wike informed that it was his deputy, Dr. Ipalibo Harry Banigo, who called his attention to the poor state of the community school in Obuama, and he immediately directed for a total upgrade of structure and learning facility.

“To God be glory, we have been able to put in our best to make it be a proper secondary school that our children will not only have access to education, but also have quality education.

“I’m sure by the time you take your time after this event, to go round the premises and see some of the structures, you’ll be quite convinced of the quality that we have been able to put in place.

“And so, we are happy that we are here. This terrain is waterlogged, actually it will be difficult if you don’t do concrete pavement like this. If you want to asphalt it, I don’t think it will last long. But with this concrete they’ve done, I’m sure it’s going to last long.”

Speaking further, governor Wike directed the Ministry of Special Projects to within the next two weeks, provide him with an architectural design for the building of two hostels, one for boys and the other for female students at the school.

“Since it is mixed school, do design, one for boys and one for the girls. Then, there will be a dinning hall for them. Since you have provided accommodation for the teachers, then there should be hostels for the students.”

In his address, Rivers State Commissioner for Education, Prof. Chinedu Mmom said no industrial action has been witnessed under governor Wike.

So far, Prof. Mmon noted, the State government has improved over 125 educational facilities in the primary, secondary and tertiary learning cadre, sustained the free basic education policy, sponsored about 29,250 students to write Basic Certificate Examination and 39,750 students for NECO and WAEC