National Association of Seadogs marks 70 years of service to humanity 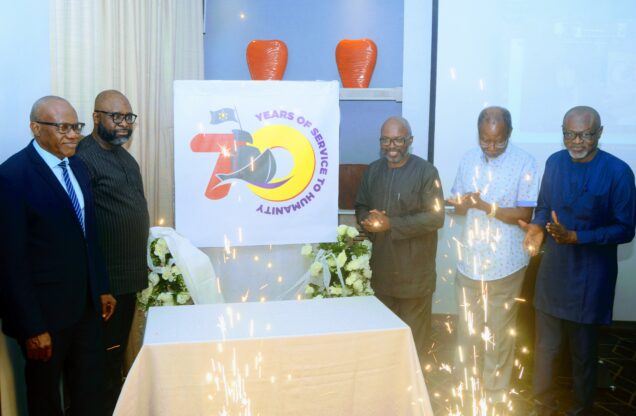 The National Association of Seadogs popularly known as Pyrates Confraternity marked its 70 years of service to humanity with the unveiling of the 70th-anniversary logo.

Speaking at the event, Uchenna Nnoli, the national secretary of the group, noted that it was a deliberate action to kick-start the 70th anniversary with a media parley.

He said the media presence was necessary to define the essence of the pyrates’ confraternity and everything that the group has fought for, for seven decades.

According to Nnoli, some of the activities of the confraternity include free medical missions across Nigeria, enlightening the public, and fighting against social injustice.

After Nnoli’s brief introduction, the Capoon of the National Association of Seadogs, Abiola Owoaje stepped up to address the pressmen on the history, mission, and vision of the Pyrates Confraternity.

Owoaje said they “took a giant revolutionary leap towards greatness and etched their names in the sands of time by standing up to obnoxious conventions to form the Pyrates Confraternity.”

Speaking further, he said: “In 1952, when the Pyrates Confraternity was formed, its fundamental ethos was not just limited to fighting for the oppressed, speaking for the deprived, and resolving myriad injustices in the march towards the attainment of a just and egalitarian society.

“Certainly, it was a trailblazing initiative by these seven undergraduates, which restored dignity, confidence, and an enduring sense of worth and justice to a large segment of Nigeria’s population in those heady days of colonial subjugation.

“Over the years, from one deck in Ibadan, Pyrates Confraternity has grown to 60 decks spread across five continents and many countries including South Africa, United States, Canada, United Kingdom, Japan, Australia, and across Europe. It is therefore fitting that the theme of our platinum anniversary: ‘70 Years of Service to Humanity’ is a reflective encapsulation of our modest contribution to humanity.

“In the 70 years of our existence, we have contributed significantly to national development in Nigeria by words and deeds. It was our organization in 1986 through a painstaking investigation wholly undertaken by our members that uncovered the pervasive corruption that had bedeviled operations at the Lagos/Ibadan expressway tollgate. One of the recommendations of that investigation was the privatization of the toll gates but this was not implemented until many years later.

“In 1988 when the Federal Government established the Federal Road Safety Corps (FRSC) patterned after the noble example of the Oyo State Road Safety Corps, and appointed Prof Wole Soyinka as the Corps Marshall, our members for love of country, selflessly offered themselves as the fulcrum upon which the organisation was forged. They laid a veritable foundation for discipline, firmness, integrity and an enviable commitment to humanitarian service turning it into a formidable paramilitary agency. Indeed Nigerians would attest to the fact that the FRSC in its heyday was devoid of the corruption and the underhand shenanigans associated with its sister agencies. The FRSC of those days drastically brought down the level of carnage on our roads and highways, and instilled attitudinal change in motorists.

“Gentlemen of the Press, the story for the struggle of democracy in Nigeria will be incomplete without recognising the patriotic contributions of the Pyrates Confraternity towards the restoration of democratic governance. Though a major part of that story remains as yet untold, our members in Nigeria and in the United Kingdom provided support in all ramifications for pro-democracy movements. We were at the fore-front of the struggle to end dictatorship in Nigeria and some of our members had to seek refuge outside the country to escape from the agents of the military junta. Many still bear the psychological and physical scars of that unforgettable episode of unbridled state-sponsored terror in Nigeria.

“On the global stage, our participation to draw the world’s attention to the Darfur crisis in partnership with Aegis Trust earned us commendation by the United Nations. Also in the United States, our organisation received a proclamation by Mayor Ron V. Dellums of the City of Oakland, California State which designated February 14 as National Association of Seadogs Day in recognition of our contributions to the society.

“Our support for the poor and vulnerable segment of the society is considerable. We have held 50 free medical missions since the inception of the NAS Medical Mission in 2010. These free medical missions held successfully across Nigeria were specifically targeted at rural communities to bridge the gap of inadequate health care delivery and bring succour to many disadvantaged Nigerians.

“We have successfully held nine editions of NAS Charity Red Balls in Nigeria and abroad since its inception in 2011. This event is dedicated to raise funds to reach as many vulnerable persons as possible and offer humanitarian services to rekindle hope in humanity. Beneficiaries include Child Lifeline, Ibeshe, Lagos, Street Children Care and Welfare Initiative, Yaba, Lagos and Orosanya Orphanage, Benin, Edo State. Others are St Anne’s Catholic Orphanage in Warri, Delta State, Amaudo Itumbauzo Project Comfort School for Children with Learning Disability, Abia State.

“As an organisation that prides itself in intellectual prowess, we have used our intellectual platforms namely, Wole Soyinka Lecture Series, Ralph Opara Memorial Lecture and Wole Soyinka Digital Town Hall to advance the much-needed advocacy for good governance, economic development, transparency and accountability, justice, electoral reforms and democratic progress on behalf of Nigerians. These intellectual platforms have attracted world leaders, academics, human rights activists and captains of industry and other resource persons in our bid to galvanise Nigerians to continue pushing for a better country.

“Through “Our Votes Count” and “Citizens Summit”, a mass enlightenment programme that employed the Ushahidi crowd mapping technology to report on general elections across Nigeria, we have been able to be accredited twice as Independent Monitors by the Independent National Electoral Commission (INEC) and the Lagos State Independent Electoral Commission. Through this initiative, we supported accountability through encouraging citizens’ participation in elections and governance by promoting the power of the ballot, and the attendant responsibility of holding elected officials accountable.

“Gentlemen of the press, the unveiling of the 70th anniversary of the logo /theme officially kicks off our celebration which will run for the next couple of months. Many activities have been lined up to showcase the nobility of our organisation, its enduring ethos and our continued quest to create a just society in Nigeria.

“As we celebrate, we shall also use the period, especially as we inch closer to the 2023 elections to continue our push for a just society where no one would be a victim of colour, gender, or creed. We shall through our celebrations join Nigerians to demand for free, fair and credible elections in 2023. This would be the most fitting climax of the celebration of our 70th anniversary.”

However, with the Pyrates Confraternity founded within the walls of a university, Owoaje noted that it was necessary for the group to urge the Federal Government of Nigeria to quickly respond to the demands of ASUU.

The NAS Cap’n said: “The founding members of Pyrates Confraternity benefitted immensely from the good quality education on offer in Nigeria at that time. Many of our members who have gone on to excel in their chosen careers and made the country proud both home and abroad had their university education in Nigeria. We are however saddened by the sorry state of education in our tertiary institutions especially Nigerian universities. It is scandalous that the Academic Staff Union of Universities (ASUU) would have to embark on a strike to prevent a total collapse of the public university system.

“Successive governments in Nigeria have habitually treated education with the same rankling levity that we are all witnessing today. This unfortunate state of affairs imperils the very future of an entire generation of young people. It beggars belief that a government can be so indifferent to what becomes of a largely youthful demography that is the most populous in the continent.

The Federal Government that has not been able to stop the massive leakage of funds meant for development and which does not blink an eyelid while funding the profligate lifestyle of its officials, now finds it difficult to devote funds to run public universities.”

When asked about some of the challenges encountered by the Confraternity, Owoaje noted that members of the group have been targeted by corrupt leaders in the society.

The NAS Cap’n noted that the Confraternity’s fight for justice and accountability in government has made their members suffer character assassination.

He said: “You know when you fight corruption, injustice, they will also fight you back.”

He noted that negative comments are made to distract the group from continuing its fight for justice and a better Nigeria but the group has refused to be distracted.

Owoaje added that the activities of the group are now more open to members of the public and journalists, noting that there is nothing sinister but mainly activities to make the world livable for all.