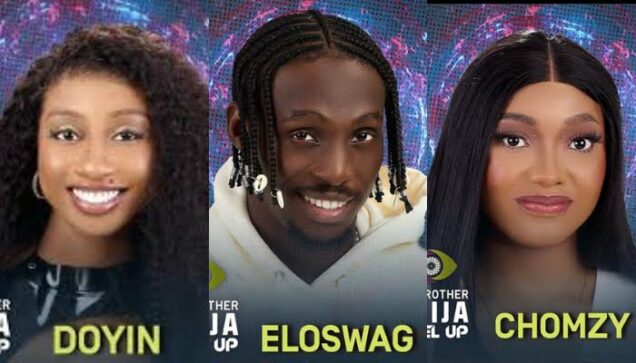 The season seven of Big Brother Naija has been full of twists and surprises, and Sunday eviction show had another major one, as Biggie unveiled Level 3 house, to the surprise of viewers.

Themed Level Up edition, the season started with the house divided into Level 1 and Level 2. Both houses were later merged.

In the latest twist to the show, Doyin, Eloswag, and Chomzy were evicted from the main Level Up house, and moved to Level 3.

Explaining the Level 3 house concept, Big Brother Naija host, Ebuka said though the housemates have been evicted, Big Brother decided to retain them as guests in the house. They are no longer in the race for the N100 million prize, but will be in the house till September 18 at least.

They will return to the main house to participate in house tasks with other housemates. The evicted contestants and remaining housemates are not aware of the whole plan.

Doyin’s eviction didn’t come as a surprise to many, as she was considered to be up against some fan favorites of the show. Doyin also confided in Biggie during her Sunday diary session that she has nine out of ten possibilities of being evicted.

Though Eloswag and Chomzy were very confident and vocal about their chances of being saved, they were booted out on Sunday.

The lovers were caught on camera chatting about them standing a better chance than Phyna and Bryann who were in the former Level 2 house.