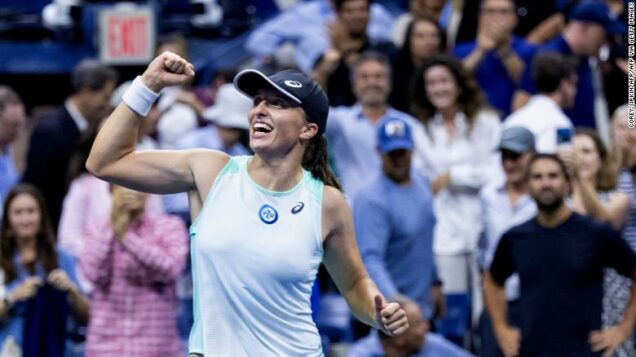 Both players were appearing in their first US Open final.

After a one-sided first set, 28-year-old Jabeur settled midway through the second but it was not enough to stop Swiatek clinching a third major title.

Swiatek’s previous two wins both came on the clay at the French Open.

Swiatek’s triumph Saturday makes her the first top-seeded woman to win the US Open since Serena Williams lifted the trophy in 2014 and the first woman to win seven titles in a season since Williams, also in 2014.
Jabeur has had a bad time as she also lost in the Wimbledon final in July and her wait for one of the sport’s four most prestigious titles continues.
Speaking on her victory, Swiatek said “this was a challenging tournament for me, it’s New York, it’s so loud, it’s so crazy, so many temptations in the city.

“I’m so proud that I could handle it mentally.”

Reacting, Jabeur said: “I want to thank the crowd for cheering me up. I really tried but Iga didn’t make it easy for me.

“She deserves to win today, I don’t like her very much right now but it’s OK. Amazing two weeks backing up my final in Wimbledon.

“We’re going to get that title some time soon.”