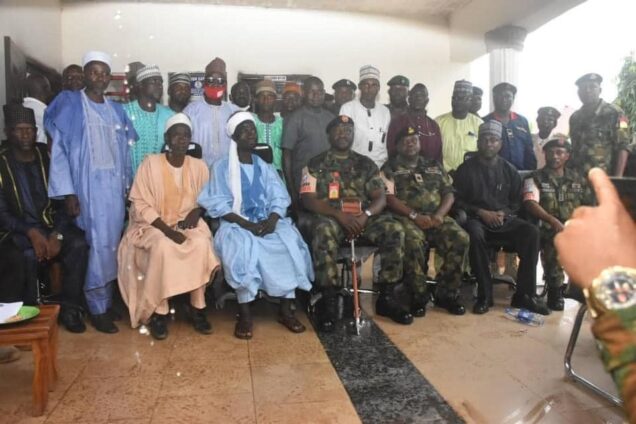 Delivering his remarks on Saturday, the Commander noted the constitutional responsibility of the security agencies is to protect the lives and properties of the citizens which he said is achievable through the support and cooperation of the people.

He said security is everybody’s business that requires collective efforts of everyone for meaningful development to strive.

General Ali further revealed that the inauguration of the committee is one amongst many none kinetic measures employed by OPSH to deliver on its mandate of peaceful coexistence and security of communities in its area of operation.

He charged the committee members to be just, fair and neutral in discharging their responsibilities.

Addressing the troops, the Commander warned that any person found performing illegal duties will face the full wrath of the law. He charged them to always discharge their duties professionally.

Speaking during a visit to the District Head of Sanga, the Etum Gwantu, His Royal Highness, Reverend Joel Galadima reaffirmed the commitment of community leaders toward supporting security agencies.

He said communities in Sanga have recently witnessed tremendous peace as a result of the increased activities of OPSH in the area.

Highlights of the event was the Inauguration of the committee members, decoration of a newly promoter Police officer, a cultural display, and a group photograph