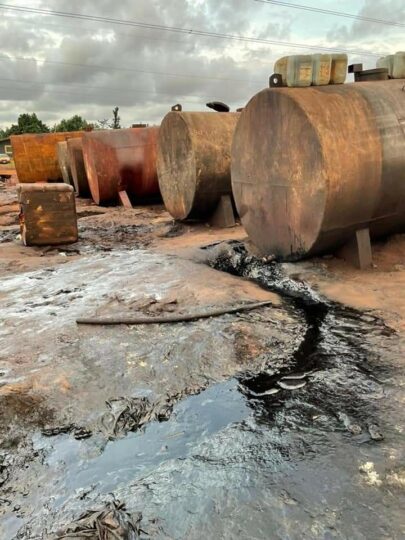 Spokesperson for the Nigeria Police, Olumuyiwa Adejobi said police information about the illegal refinery was made available via a whistle blower through the recently created Nigeria National Petroleum Company’s (NNPC) Command and Control Centre Portal.

According to him, the raid on the illegal facility was carried out by operatives of the Inspector General of Polic3 Special Task Force on Petroleum and Illegal Bunkering (IGP-STFPIB) in the late hours of August 7, 2022.

He added that three empty DAF Trucks, thirty-one 31 immobile surface tanks – 7 of which were loaded with unspecified quantity of petroleum products, were discovered by the police operatives at the site during the raid.

He added that preliminary investigations revealed the site was also used as a dumpsite for petroleum products.

All suspects will be charged to court upon conclusion of investigations.

The Force spokerson added that the Inspector-General of Police has tasked special enforcement units on prevention of activities of economic saboteurs.
He also tasked them to ensure deployment of necessary manpower and other operational assets to ensure a total clampdown on criminal activities detriment to the economic growth of the nation.

“The IGP has similarly supervised the strengthening of the Unit with a charge to intensify efforts, in conjunction with local police officers, to sustain police approved operational standards in tackling economic sabotage, crimes and criminality in the country.

“He equally charged the Assistant Commissioner of Police in charge of the Unit to embark on strict supervision of the Unit in compliance with the directives,” he added.