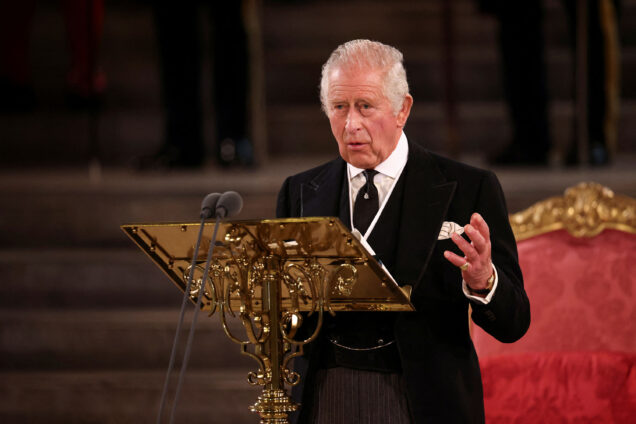 He was responding to numerous tributes MPs paid to her late mother, Queen Elizabeth III who died last Thursday at the age of 96.

The King said he was deeply grateful for the addresses of condolences from MPs and peers which “so touchingly encompass” what the Queen “meant to us all”.

He made reference to Shakespeare’s Henry VIII, where Elizabeth I is described as “a pattern to all princes living”.

King Charles said he could not help but feel the weight of history which surrounded those in Westminster Hall and “reminds us of vital Parliamentary traditions, to which MPs and peers dedicate themselves”.

“Parliament is the living and breathing instrument of our democracy,” he said.

The monarch said connections to his darling late mother were seen all around, from the Silver Jubilee fountain in New Palace Yard to the sundial in Old Palace Yard marking her Golden Jubilee.

King Charles stated that the Great Bell of Big Ben – “one of the most powerful symbols of our nation” – will mark the late Queen’s progress from Buckingham Palace to Parliament later this week.

Earlier, House of Common Speaker, Sir Lindsay Hoyle welcomed the King and the Queen Consort, saying that the loss of the Queen was felt around the world, the UK and the entire Commonwealth – “which she did so much to nurture.”

“Newspapers have been filled with photographs of the Queen, but the most touching have been those showing family life.

“Deep as our grief is, we know yours is deeper,” he told the King.