Ogun girl, 13, intercepted in Kebbi on the way to Libya 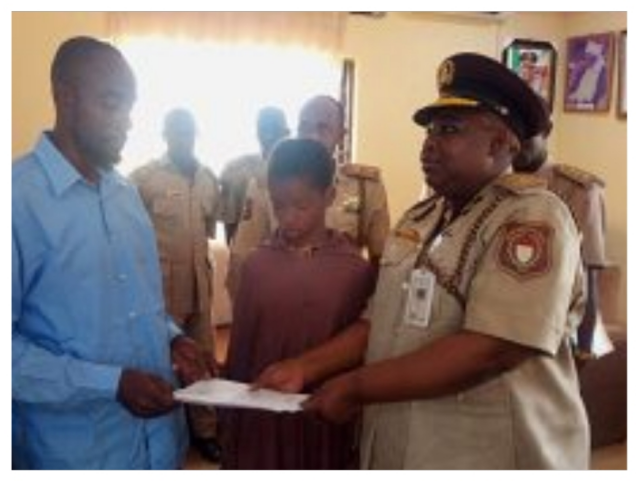 The Nigeria Immigration Service (NIS), on Monday handed over a 13-year-old girl from Ogun it arrested in Kebbi on her way to Libya.

The girl was traveling alone when she was arrested by immigration personnel in Koko/Besse Local Government Area of Kebbi.

The Comptroller of the NIS in the state, Mrs Rabi Bashir-Nuhu, made this known while briefing newsmen in Birnin Kebbi on Monday.

“The girl was intercepted at Koko border on Friday, Aug. 9 as she was traveling from Ogun to Sokoto unaccompanied and alone.

“The officers became suspicious of her and started asking questions and later discovered that she was traveling alone.

“She gave our men some contacts and among the contacts was someone from Libya which made us to believe that the girl was a victim of trafficking.

“Upon further interrogation by the Anti-human Trafficking Unit, the girl claimed she was going to Libya to serve as house maid.

“We did not believe that; we have the belief that she is being trafficked to go to Libya to be used for labour exploitation, prostitution or organ harvesting,” the controller said.

Bashir-Nuhu assured that NIS would not allow any suspicious character or person profiting from human trafficking to pass its net in the state.

In her response, the victim told newsmen that she hails from Ekiti State but lives with her grandmother in Ogun.

“Someone contacted my grandmother and asked me to come to Sokoto state and she gave me a contact that I should call If I come to Sokoto for onward movement to Libya.

“My mum and dad are separated but the mum is living in Ogun state, as for my father, I don’t know where he is now. I am in Junior Secondary School, class two,” she said.

Receiving the victim, Sokoto Zonal Commander of National Agency for the Prohibition of Trafficking In Persons (NAPTIP), Alhaji Abubakar Abdullahi, said that the agency would undertake thorough investigation of the matter.

“We will ensure that the girl reaches her family and undertake diligent investigation,” he said.

Abdullahi, represented by Rilwanu Buhari, commended NIS for collaborating with the agency to eradicate human trafficking in the country. (NAN)